Down Don't Bother Me - Jason Miller 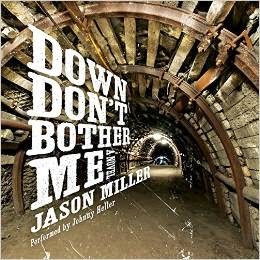 Now in addition to having an eBook and a physical book always on the go, I also have an audio book queued up as well - sometimes to help me fall asleep.

Well, there was no way I was falling asleep listening to Jason Miller's debut novel Down Don't Bother Me. In fact - I stayed up much later than I had planned!

Miller's protagonist is Slim, an Illinois coal miner with a propensity for finding people. It's not a job for Slim, but he's helped out folks before. But this time, he doesn't have much of a choice. A reporter is found dead in the mine - and the photographer working with him is missing. Luster, the mine owner, wants to run his own search for the photographer - who just happens to be his son-in-law. Well, Slim is a single father, so when Luster dangles a pension as a carrot, Slim takes the job.

Now, I'm sure the written book will Miller many fans. But - the audio version was fantastic! The reader was Johnny Heller - one of my favourites.  He has a low, gravely, worn voice that completely embodied the mental image I had of Slim. Heller's interpretation of Miller's story was perfect rhythm, cadence and tone.

The setting is just as great. Slim makes his home in Little Eygpt - one of the last colliery towns in Illinois. Its down and dirty, populated by a wild variety of characters - methheads, environmental activists, gangs and everyday folks just trying to make a go of it.

I'm going to applaud the supporting cast as well. Slim's daughter Anci is a firecracker - smart and wise to the ugliness of the world even at twelve. I enjoyed the relationship between Slim and his girlfriend Peggy - the give and take, the yes or no. Every protagonist needs a sidekick and Slim has a good one with Jeep - a big, strong guy who is like a brother to Slim.  But, the standout of course, is Slim - he's rough around the edges, but smart, caring and a guy you'd want to have in your corner. He's a lead character you can't help but get behind and cheer for.

What sets off these relationships, and indeed the whole book, is Miller's dialogue and descriptions. Miller's prose are folksy, real, gritty, and so addictive to listen to. I don't think I would have enjoyed the written book as well. The audio just brought the novel to life. The descriptions of the mines and the men who work them were atmospheric (and for this reader claustrophobic!) I could taste the coal dust as the men emerged into the light.

Now, I need to mention the mystery as well - which was wonderfully plotted. I couldn't predict where the story was going to go and happily went along for the ride through the back roads of Little Egypt, eager to join the search for the photographer.

This is the first in a planned series and I will absolutely be listening to the next entry. Highly recommended. Down Don't Bother Me is a great entry in the 'grit lit' genre. Fans of Elmore Leonard's Justified will enjoy this novel. You can connect with Jason Miller on Twitter.

What great thoughts! I hope to see you around my blog

Wow, I can tell how much you loved this one.