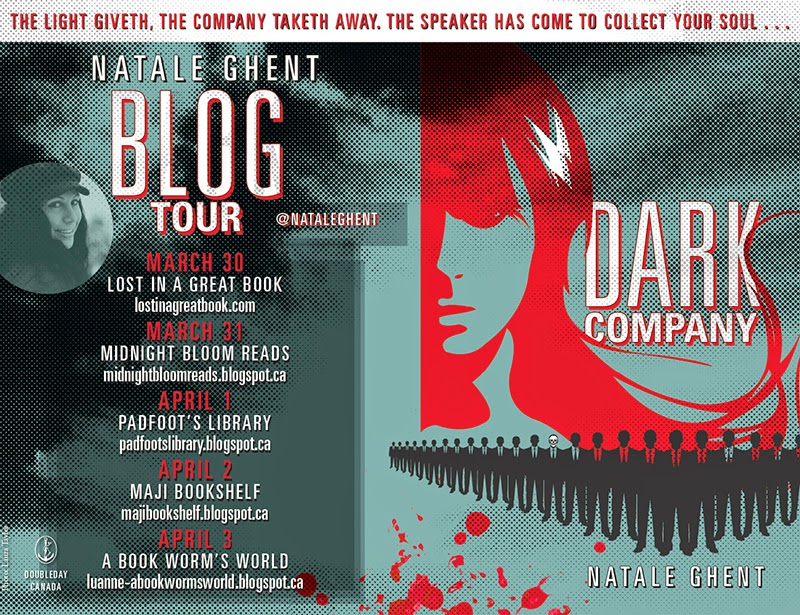 I'm always curious as to how an author comes up with the idea for their novel. Natale reveals the impetus for Dark Company in the guest post below....and I had goosebumps by the last paragraph.

Oh, and did I mention I have a signed copy of Dark Company to giveaway as well?

"I have a confession: I've met the dark head-on. This may seem like a bold statement but let me explain.

There was a time when I was a practicing hypnotherapist. I had an office and clients. I helped people overcome phobias and find the source of things they couldn't reconcile or face on their own. I practiced past-life regression and heard some incredible stories. I did this part-time along with my writing because I enjoyed it.

I’ve always been fascinated by the mind and what it’s capable of, and how it can be twisted by life experiences and straightened out again by love. But the part of hypnosis that grabbed me and held me so firmly was the dark world of spirit and entity release.

This is an area that isn’t talked about much, even in hypnotherapy circles. But the more work I did, the more I understood that dealing with people’s pain meant dealing with the dark energy that comes along with it. As I delved deeper and deeper into the source of things for a client, I almost always found some kind of darkness at the root of it.

It was rarely obvious or easy to see. It was often disguised as something innocuous, something completely unrelated. It would assume a seemingly harmless form, like a dark triangle or circle or some other geometric shape, on some part of a person’s body.

In each case, the closer I got to discovering the truth about the dark thing hiding itself, the more it would try to fool me. It would lie. It would change into something else. And I would chase it around with questions until eventually it would reveal itself and I could transform it.

Most of the dark energy I met was quite easy to deal with. In fact, most of it was grateful for the opportunity to reinvent itself. But occasionally I would meet something so dark, so sinister, I had no choice but to destroy it.

This isn’t work for the faint of heart. It isn’t work for people who are easily frightened or overcome. It’s a battle of wits and wills. An endurance test. Sometimes the session would go on for hours. But the results were immediate and powerful.

There was an interesting spin-off to all of this as well: the souls of people who had died but were trapped on the earth plane started coming to me for help after office hours. They needed assistance crossing into the light. They came in droves at night and in the wee hours of the morning. They were weary and confused and sometimes demanding. I would help every one of them—every one that I could see or hear. But the more souls I helped, the more would come, until I was overwhelmed; I soon had little time or mental freedom to write.

I will never forget what made me stop practicing. It was late at night. I was sleeping after an exhausting day when I was suddenly aware of someone sitting on the end of the bed. When I opened my eyes, I saw the silhouette of a young woman. She had her back to me, her head turned to one side, looking at me from the corner of her eyes. She was patiently waiting for me to acknowledge her.

Maybe it was the exhaustion, or the fact that I was struggling to accomplish both my writing and my healing work at the same time, but I sat up and said, “I can’t help you.” She didn't push the matter. She simply turned her head, rose, and disappeared.

I wish I had handled it differently. I wish I had taken the time to help her before closing the door. But I didn’t.

It was shortly after this that the character who inspired Dark Company made herself known. I was driving home from up north and she just got in the car, buckled herself in, and proceeded to talk to me. Maybe she felt my work with the dark wasn't finished. Maybe she felt I had gone so far down those murky alleyways, that to turn around and walk away from it all would be a shame. Maybe she thought it was a good way to open the door again. Whatever the reason, I’m so glad she did."

For more about Dark Company, please visit www.darkcompanybook.com. Or get started now - read an excerpt of Dark Company. Or watch the book trailer.

"Natale Ghent is an award-winning author of, among other books, Gravity Brings Me Down and Millhouse. Her work has been critically acclaimed, garnering awards and recognition internationally."You can connect with Natale Ghent on Twitter. "

And courtesy of Doubleday Canada, I have a copy of Dark Company to giveaway to one lucky reader. Open to Canada only, ends April 18/15. Enter using the Rafflecopter form below.

Goosebumps is right, sounds like a book you won't be able to put down.
sallycootie@gmail.com

Natale was studying to be a landscape architect and was a journalist as well. Very talented. Thanks for this fascinating and intriguing giveaway and feature. saubleb(at)gmail(dot(com

Faith is the bird that feels the light when the dawn is still dark. See the link below for more info.