When She Was Good - Michael Robotham 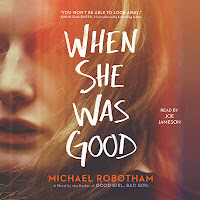 I'm a big fan of Michael Robotham's writing. I've really enjoyed the Joe O'Loughlin series, as well as the stand alones. Robotham introduced a new series last year featuring forensic psychologist Cyrus Haven. And it was just as good as I had hoped. (my review)

Haven returns in the newly released When She Was Good. And so does Evie Cormac - a teenager who was discovered in a hidden room when she was a young child. She can tell when anyone is lying to her. But who is she? She has never told anyone her real name - if she knows it. Or what happened to her or who might be responsible? But the past never stays buried does it? Cyrus has stirred things up - and Evie is on the run again.

I have been wondering if we would ever find out about Evie's past. She is a fascinating character - well, actually they both are. Cyrus also has a dark and troubled past. Robotham has a done a great job building the two leads. I like them and find myself fully engaged and interested in their stories.

The search for Evie's past - or is the past searching for Evie? Either way, it's a tense journey to the final pages. Danger, action, suspense, corruption and more propel the story forward. And long hidden memories and details up the ante. Things unfold through both Evie and Cyrus's voices. The plotting is intricate and well played.

I chose to listen to When She Was Good. And that choice was made based on the reader - Joe Jameson. He did the first book as well and I'm so glad he did latest as well. The continuity is great. His voice is rich and full and his speaking voice is clear and easy to understand. He created distinctive voices for each character The Cyrus is calm and measured. The Evie voice is great - I absolutely hear a teenage girl with a chip on her shoulder. Those unique voices have created clear mental images of the characters for me. He interprets the book well and uses his voice effectively for the emotions and action as they play out. I've said it before and I'll say it again - I find myself more drawn into a book when I listen to it. Hear for yourself - listen to an excerpt of When She Was Good.

Another excellent listen from Robotham - but hey, I knew it would be. An easy five star book.
Posted by Luanne at 7:00 AM

I've also enjoyed books by Robotham and look forward to reading both the books in this new series. Will definitely consider doing that on audio. You sold me! Ha!

Aha! Another Robotham fan! If it's a good reader, I am finding I enjoy the audio versions more and more Kay. Let me know how you like this series.

This would be a new author to me. I need to check it out, and the audiobook version. A good narrator can make a good book even better, can't they? I feel that way about Diane Chamberlain's books when read by Susan Bennett.

Grandma Cootie - this was a new series and I was worried I wouldn't like it after loving the Joe O'Louglin books. A good narrator is a must! Be aware that are some trigger situations in this series.

Thanks for the enthusiastic review. New author for me.

Mystica - I hope you enjoy his work!