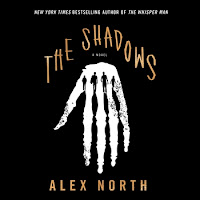 I listened to Alex North's previous book - The Whisper Man - and really enjoyed it. I was eager to listen to his newest - The Shadows.

The covers of both titles feature handprints - with a bit more when you look closely. I liked the elongated shadows and the figures making their way into .....?

The Shadows opens with a horrific crime in a small English village. Now, it's one you've read in the papers before. Or so I thought. I was wrong - there's so much more to this crime.

Paul Adams was a schoolboy when it happened. It involved the boys he thought were his friends. One died, one went to prison - and one - Charlie - was never seen again. That was twenty five years ago. Paul left the village and never returned, until now. And only because his mother is dying. And then - another boy is killed in a neighbouring village - and his death seems to be a copy of that old crime. Is Charlie back?

I'm not going to spoil things for you - the method of murder is frightening - and very, very creepy. (I love creepy!) Things start happening to Paul - someone following him, flashes of the past and what's in his mother's attic. (Attics or basements always house the gotcha stuff, don't they?) What's happening now? And what really happened then?

North does subtle creepy really, really well. A sound, a name, a memory, a possibility. The reader knows there is something bad out there and it is the anticipation that ramps up the creepiness factor over and over again. I loved the building tension. The Shadows are the woods behind Paul's boyhood home. The description of the woods themselves is enough to give you goosebumps.

I appreciate not being able to predict a plot. There was no way to know where North's story was headed and how it would end.

I chose to listen to The Shadows. The readers were Hannah Arterton and John Heffernan. I've said it before and I'll say it again - I become much more immersed in a tale when I listen. The Shadows absolutely was better for me in audiobook format. Both readers have lovely British accents that are easy to understand. They both enunciate well and speak clearly. Heffernan has a wonderfully expressive voice that captured the tone and tenor of the plot. The gravelly tone of his voice was perfect for the uncertainty, the danger and the spookiness of the book.  Arterton did a good job as well - she too has an expressive voice that's easy on the ears. Hear for yourself - listen to an excerpt of The Shadows.

Another atmospheric listen from North. I'll be watching for his next book.
Posted by Luanne at 7:00 AM

I've been hearing about this book and this author for awhile now and I think it's time to put both on the TBR. For some reason Stephen King has been hit and miss with me the last few years, after loving every single thing he wrote for years. Sounds like The Shadows is full of that creepy anticipation I like so much. Thanks for the review.

Grandma Cootie - I had a slump with King's works a few years back, but have found his last few really good. I think you'll enjoy these two! Let me know....

I have this author's previous book and also this one on my Kindle. Am thinking that I might see if I can get the audio from the library (probably this fall) and do a read/listen. That would work, right? I love spooky in the fall. That cover is brilliant!

Kay - a read/listen would absolutely work - and I would be quite curious to hear which you preferred. The covers are quite good.