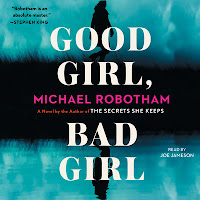 Michael Robotham is firmly on my 'must read' list. I've read all of the Joe O'Loughlin  series. I've got the feeling that this series might be winding down. But, I'm pretty happy with Good Girl, Bad Girl - the first in a new series featuring forensic psychologist Cyrus Haven.

Haven is a great lead character - intelligent, driven but wounded, with darkness in his own background. He works with the police department, but isn't fully accepted. I appreciate a flawed lead as I find I bond more with the character. I enjoyed his fractious relationship with  DCI Lenny Parvel. She's gruff and tough and is also part of Haven's past.

When a teen skating star is discovered murdered on a lonely footpath, Cyrus is called in to assist. His interviews and probing uncover a life that doesn't match her 'good girl' reputation. And there are more than a few suspects for whodunit.

He's also called in to assess a teen girl (the 'bad girl' of the title) who wants to be released from the group home setting she lives in as she says she is eighteen. Says? Uh, huh no one truly knows how old she is. Evie Cormac (a name given to her) was discovered in a hidden room at a violent crime scene. The man who was holding her is dead - unable to provide answers. And Evie herself - she either doesn't know or won't tell. As the book progressed there are small references that only begin to hint at her past. And Haven is the only person she seems to actually like. Why? Because he tells the truth. And Evie can uncannily tell when someone is lying. It's hard to read Evie's story and the reader will be firmly on her side, despite her attempts to alienate everyone who crosses her path. Who can blame her? This first book is the beginning of (hopefully) a firmer relationship between Cyrus and Evie.

So good on so many levels. Robotham's books are easy to get lost in for hours at a time - addictive listening/reading at its best. Getting to know these new players intrigued me as did the search for the murderer. The tension in Good Girl, Bad Girl just never lets up. The final whodunit wasn't who I expected and there's a nice little twist in the last few chapters. And those last chapters are action packed as well.  Kudos to Robotham for coming up with this premise and these two leads. I will be eagerly awaiting the next book in this series. Another excellent listen/read from Robotham - but hey, I knew it would be. An easy five star book.

I did choose to listen to Good Girl, Bad Girl. And that choice was made based on the reader - Joe Jameson. His voice is rich and full. His speaking voice is clear and easy to understand. He created distinctive voices for each character, making it easy to know who was speaking. And those unique voice created much clearer mental images for me. He interprets the book well and uses his voice effectively for the emotions and action as they play out. I've said it before and I'll say it again - I find myself more drawn into a book when I listen to it (and it's often harder leave)!

Here's an audio excerpt of Good Girl, Bad Girl. Or if you prefer, here's a written excerpt.
Posted by Luanne at 7:00 AM