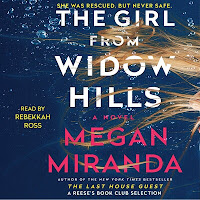 
Arden was a child when she went missing for three days - having sleep walked out into the night. Miraculously she was found. But the aftermath ended up being too much for her single mother - and Arden herself. Arden has no recollection of these missing days. An adult now, Arden has reinvented herself - new name (Olivia), new locale. Until the night she sleepwalks again - and trips over a dead body.

Ohh, great premise! Who is the corpse? Does Olivia know him? Did he know her? And worst of all - did she have something to do with this man's death? After all, she's sleepwalking again....and again, she has no memory of it...

I loved the uncertainty. The reader is with Olivia as she tries to piece together what's going on, rather than with the police investigation. Miranda gives us lots of suspects and lots of questionable behaviour by a number of characters that muddies the waters. Including Olivia herself. Olivia's past is slowly revealed through newspaper articles and book excerpts. As these inserts continued, I started to have my own suspicions. I liked Olivia as a lead character, but worried about her naivete at points - as I was mentally yelling at her....No, they're lying! The supporting cast is a mixed bunch and the listener will have no problem picking out the ones you don't like!
I chose to listen to The Girl From Widow Hills. The reader was Rebekkah Ross. I've listened to other books she's narrated and I really like her voice. It is pleasant to listen to, clear and easy to understand. Her narration is very expressive, capturing the emotions of all the characters. The voice for Olivia has just the right tone - trusting, but as things progress and she becomes stronger, so does the strength of Olivia's voice. The voices used for the 'not so nice' characters were spot on. Ross's voice has movement, capturing the danger and action of the plot. Hear for yourself - listen to an excerpt of The Girl From Widow Hills.
As the final pages drew near, I thought I knew whodunit. I was right, but the ending was really well done - and tension filled! Great summer listen.
Posted by Luanne at 7:00 AM

I've seen her books, but have never read them for myself. I'll have to remedy that soon!

Icewinneanne and Ethan - hope you enjoy it as well!

Sounds very good. Full of suspense and a page turner. Thanks for the review.

You're welcome Mystica - thanks for stopping by.