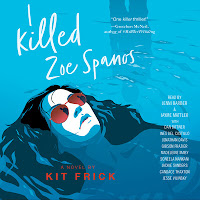 I like adding a YA novel to my reading list every so often. Kit Frick's ("Writing complicated girls out of impossible situations since 2018") latest is I Killed Zoe Spanos.

Anna takes a summer job as a nanny for a wealthy family in the Hamptons. She's happy to take the position as she needs to get away from her life, her friends and her own excessive drugs and drinking use.

But trouble finds her anyway. The residents of Herron Mills are still on edge after the disappearance of local teen Zoe Spanos. Anna keeps getting told that she looks a lot like Zoe. And being a teen novel, you know what's going to happen next don't you? Uh huh - Anna decides to investigate on her own. She just feels a connection with Zoe. Now, this isn't a spoiler as it is in the publisher's description of the book - Anna ends up being charged for Zoe's death.

But! Also investigating is teen Martina who hosts the podcast Missing Zoe podcast. I'm finding podcasts in a lot of books now. It's like a new take on epistolary story telling. I quite like it. (And I'm a big podcast fan!)

Frick takes us down the garden path and back again - multiple times. There are so many ways the final aha could have been played out. But, there was no way at all to guess what was coming in the final pages. I loved the uncertainty and the unreliability of almost everyone's narrative. Twists and turns galore.

And being a YA novel, there's lots of angst, drama, mysterious estates, mysterious neighbours, undercurrents, and more - on top of the murder. Fans of Riverdale would most likely enjoy I Killed Zoe Spanos.

This one was just so much fun to listen to. I love listening to a book - I become much more immersed in the story. This audiobook was really different as it employed a large number of readers  - the two main characters and a large number of supporting characters. I really enjoyed this - it makes it so much easier to differentiate who is speaking which I really liked. Some were new to me and others were familiar names. Those reading teen characters had voices that sounded 'younger' and were just right for the characters. All of the narrators spoke clearly and were easy to understand. The tone and tenor of the plot was well portrayed and communicated with inflection and movement in the reading. Hear for yourself - listen to an excerpt of I Killed Zoe Spanos.

A "Riverdale" feel makes it a fun listen!

Way to change things up a bit! This sounds like a fun listen.

Summer seems the right time for YA reads/listens for me.