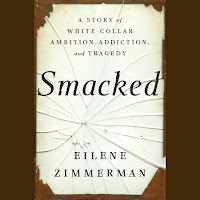 My latest listen is Smacked: A Story of White-Collar Ambition, Addiction, and Tragedy by Eilene Zimmerman.

"A journalist pieces together the mysteries surrounding her ex-husband’s descent into drug addiction while trying to rebuild a life for her family, taking readers on an intimate journey into the world of white-collar drug abuse.

Something was wrong with Peter. Eilene Zimmerman noticed that her ex-husband looked thin, seemed distracted, and was frequently absent from activities with their children. She thought he looked sick and needed to see a doctor, and indeed, he told her he had been diagnosed with an autoimmune disorder. Yet in many ways, Peter seemed to have it all: a beautiful house by the beach, expensive cars, and other luxuries that came with an affluent life. Eilene assumed his odd behavior was due to stress and overwork—he was a senior partner at a prominent law firm and had been working more than sixty hours a week for the last twenty years.

Although they were divorced, Eilene and Peter had been partners and friends for decades, so when she and her children were unable to reach Peter for several days, Eilene went to his house to see if he was OK.

So begins Smacked, a brilliant and moving memoir of Eilene’s shocking discovery, one that sets her on a journey to find out how a man she knew for nearly thirty years became a drug addict, hiding it so well that neither she nor anyone else in his life suspected what was happening. Eilene discovers that Peter led a secret life, one that started with pills and ended with opioids, cocaine, and methamphetamine. He was also addicted to work; the last call Peter ever made was to dial in to a conference call.

Eilene is determined to learn all she can about Peter’s hidden life, and also about drug addiction among ambitious, high-achieving professionals like him. Through extensive research and interviews, she presents a picture of drug dependence today in that moneyed, upwardly mobile world. She also embarks on a journey to re-create her life in the wake of loss, both of the person—and the relationship—that profoundly defined the woman she had become."

Wow, just wow....I cannot even fathom what Zimmerman and her children have gone through. And I think it's quite brave of her to write about her life - and her ex-husband's death. I applaud her sharing this reality. Will their story help else realize someone in their life need help before it is too late? Maybe. Illegal drugs use is found everywhere regardless of gender, race, financial status or locale. Zimmerman inserts facts, figures and other interviews alongside Peter's story, painting a bigger picture.

Smacked is an eye opening and brutally honest memoir. It's heartbreaking to listen to, especially as  children were so affected. This audiobook is so very personal, as Zimmerman herself reads the book. Hear for yourself - listen to an audio excerpt of Smacked. How can you really rate someone's life? Five stars for the telling and sharing.
Posted by Luanne at 7:00 AM

It looked like a Mystery. I would have never guessed its genre. I'll bet it is an intense Memoir. The title caught my eye. I could not move pass the title "Smacked."

Hey Tea - yeah, I can see mystery with that cracked glass. And it is indeed very intense!