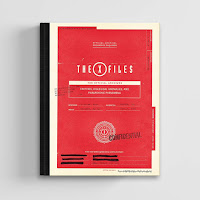 What book caught my eye this week?  This one's for fans of The X-Files - one of the few shows I've watched more than once... The X-Files: The Official Archives: Cryptids, Biological Anomalies, and Parapsychic Phenomena by Paul Terry.

"A fully authorized, richly illustrated inside look into 50 of Mulder and Scully’s most memorable monster cases

When an X-Files fan opens up The X-Files: The Official Archives, they are gaining access—for the ﬁrst time—to Agents Mulder and Scully’s notes, records, and visual evidence from actual X-File reports. Designed to mimic a collection of FBI case ﬁles and packed with such items as autopsy reports, mug shots, lab results, handwritten notes, newspaper clippings, pages ripped from antique books on the occult, and security camera printouts, this fully authorized book is the only one of its kind. Detailing the agents’ investigations into 50 cases of cryptids, biological anomalies, and parapsychic phenomena—from the Flukeman to The Great Mutato to Pusher—The X-Files: The Official Archives showcases some of the show’s greatest villains (some dastardly, some just misunderstood), and instructs future agents on how to successfully investigate the paranormal."