My Kind of People - Lisa Duffy 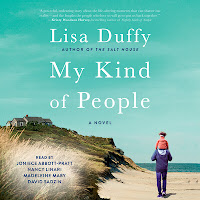 Yes, Lisa Duffy's new novel, My Kind of People, is the latest of my summer listens. I'd love to live in that house with a view of the ocean!

Everyone on Ichabod Island knows the story of ten year old Sky. She was found as an newborn abandoned at the local fire station. She was adopted by the couple that found her. But, she's lost those parents as well - to a car accident. In their will, they've asked their friend Leo to raise Sky.

Leo loves Sky, but this is a huge transition for all of them. Leo's husband Xavier doesn't want to leave their home in the city and can't get used to this new situation.

That sets the stage for My Kind of People, but there's much more to this story. There are a number of other plot lines that intersect with Leo and Sky's story. Maggie often looks after Sky, but her own life is in turmoil. A relative of Sky's arrives on the island as well - what are their intentions? And every small town has a busy body doesn't it? Duffy has created a particular odious woman named Agnes. She's pretty easy to dislike. There are also chapters from a mystery woman scattered throughout the book. Who is she? Sky's friend Frankie and local handyman and neighbor Joe complete the cast.

I really liked Leo. He's kind, thoughtful and caring. Maggie is the female version of Leo, also very easy to warm up to. Sky is well depicted and I really enjoyed the conversations and interactions between Frankie and Sky. Xavier was hard to like, despite Leo's love for him.

Duffy has written a wonderful story of love, loss, friendship, family, hope, happiness and more. (And you might just need a tissue or two....)

I chose to listen to My Kind of People. I've said it before, but I'll say it again - listening to a book is immersive - I feel much closer and involved in the story. My Kind of People employed four narrators - Joniece Abbott-Pratt, Nancy Linari, Madeleine Maby and David Sadzin. They were all really good and matched the mental images I had created for the characters. I always enjoy having more than one reader - it's more 'real', if you will and feels like those conversations are really happening. Leo's voice was warm and caring, Sky's voice was childlike and Maggie was just comforting. The mysterious  woman sounded well, mysterious! They all had clear speaking voices and interpreted the author's work well. The emotion and timbre of the story was also well depicted. Hear for yourself - listen to an excerpt of My Kind of People.

I thought about the title after I finished listening to My Kind of People. Each character in the book  would have a different take on who their 'kind of people' would be. Duffy has created some wonderful characters that I would be happy to have in my life. And it made me think about my circles of people. Those of you who love character driven novels or television shows like This is Us, are going to love My Kind of People.
Posted by Luanne at 7:00 AM

I e never tried the audio books, but I may need to give it a try.

Patti - give one a try and see what you think. You should be able to find them online through your local library.