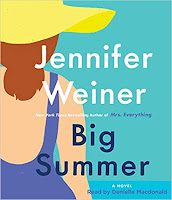 And continuing on with my summer listens list is the newly released Big Summer by Jennifer Weiner.

I read Weiner's debut novel, Good in Bed, back in 2001 and have been a fan of her stories ever since.

Big Summer's lead character is Daphne Berg. She's an influencer for plus size women. She's finally found success, self acceptance and happiness. But when her high school 'best friend' Drue contacts her after many years, Daphne's doubts about herself and their relationship back then resurface. But, she's going to be the bigger person and agrees to be Drue's maid of honor at her upcoming nuptials.

Daphne is an influencer. I learned a lot about those who have this as a career. Lots and lots of time spent posting - and posing to garner those followers and likes. "Even if things don’t get better, you can always make them look good on the Internet."

Big Summer starts off with a prologue that puzzled me as I began to read the following chapters. How was this going to tie into Daphne's story? I initially thought that Big Summer would only be a story of relationships, with others and one's self .Which I would have been very happy with! When I reached what could have been an ending, I was surprised to find there was more to hear - lots more. You see, Big Summer morphs into a mystery! And that's kind of the second half of the book. And that prologue finally ties in.

I really liked Daphne as a lead character. She's funny, kind and her voice, experiences, thoughts and thoughts all ring true. Weiner has written many of her characters from her own experiences and her books benefit greatly from that personal injection. I was reminded of earlier books' characters, all as well liked. Mean girl Drue is the one you'll love to hate.....or will you? My feelings on her changed more than once, as secrets and truths are revealed.

The mystery is intriguing, with more than one culprit offered up for the crime. Things got busy in this latter half and I'm not sure all the plot devices worked for me. But, I did enjoy both parts of this novel. The social aspects, the relationships, resolutions and a nice whodunit kept me eagerly listening. Hear for yourself - listen to an audio excerpt of Big Summer.

I choose to listen to Big Summer. The narrator was Danielle Macdonald. She was perfect! Her voice has a younger tone to it and is very expressive, matching the image I had mentally created for the character. Her voice is pleasant and easy to listen to. She speaks clearly and enunciates well. Macdonald interpreted and presented the author's work 'just right'. Bottom line - I believed in the performance. I started thinking I had listened to a previous book by this narrator. It was only on looking up Danielle Macdonald that I discovered she was the actress who starred in Dumplin'.

Another good addition to your summer reads/listens list.
Posted by Luanne at 7:00 AM

I'm listening to this one now and really enjoying it!

Glad to hear this one worked well on audio. It's been a while since I read a book by Jennifer Weiner, but this one sounds like one I ought to try.

It was the first one for me in awhile Kay - good escapist listen.

I did read a book by this author a very short while ago but this one is new to me. Thanks for the review.

Thanks for stopping by Mystica!

Definitely a fan of Jennifer Weiner!!