Where Are the Children? - Mary Higgins Clark 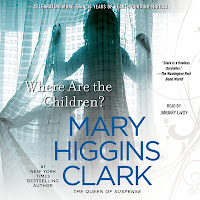 Where Are The Children by Mary Higgins Clark was originally released in 1975. It is newly released as an audio book.

Clark has penned a new introduction to the book. She names Where Are the Children as the book that kick-started her incredible career.

Although I've read a number of Clark's books, I had never read Where Are the Children. More and more, I'm doing my 'reading' through audiobooks, so I was quite happy to listen to this title.

Nancy Harmon was a suspect in the deaths of her two young children. She was cleared in court, but not in the public eye. She changed her name, appearance and locale in an attempt to start over. She found love with Ray and they have two children together. And she is as happy as she can be. Until......yep, unbelievably these children go missing. How could this happen again to her? And as much as she knows knows she has nothing to do with their disappearance, the cops think she does......

Now, this book  was written 44 years - and at the time it created some controversy. In the intro, Clark mentions this book was turned down by some publishers because of some of the content. It would have been boundary pushing in 1975. I kept this in mind as I listened. Clark also says that the inspiration for the story was the real life case of Alice Crimmins.

What happens to Nancy is unthinkable and she collapses. A friend of the family who happens to be a therapist believes that the past holds the clues to what is happening now. As she answers his questions we learn that Nancy's first marriage was more than a little creepy. The childsnatcher also has a voice. Creepier. His motive for taking the children is, well, deviant. And this is probably what scared off publishers in 1975.

The reader knows what is happening with the children as well as how the search for them is progressing. A back and forth narrative ramps up the tension. (And ensures the reader listens to just one more chapter) And kudos to Clark. Twists and turns in a novel are all the rage now. Where Are the Children includes some nice unexpected twists.There's a reason Mary Higgins Clark is called the Queen of Suspense.

This early novel was a treat to listen to.  January LaVoy was the reader. She's a narrator I know and I quite enjoy her voice and readings. Her performance in Where Are the Children was excellent. She has a rich, smooth voice with a nice undertone. Her enunciation is crisp and clean. Her voice is clear and easy to understand. She has interpreted the book well and her voice telegraphs the tension and action well. She provided really believable and distinctive voices for the characters. Her children's voices were especially well done. Listen to an excerpt of Where Are the Children.
Posted by Luanne at 7:00 AM

I used to gobble her books up but haven't read one in years. I bet I read this one way back when.

I used to read her all the time but haven't in many years and don't know why other than "so many books".

Bermudaonion and Vicki - I read tons of her early stuff years ago, but haven't picked one up in a while. I know she is coauthoring with Alafair Burke and I might pick up one of those. But....."so many books!"

It was Mystica - especially given when it was written!

I used to read MHC books all the time. My grandmother had several, and I would read them anytime I visited her.

Dianna - Her writing longevity is quite amazing isn't it!

Loved her writing. Used ti read her books back in the 70’s - mid 80’s........not sure why I stopped reading her. Perhaps too many choices. Will give this one a read.

Icewineanne - Suspense is all the rage and this one is over forty years old - and is still a pretty good read.