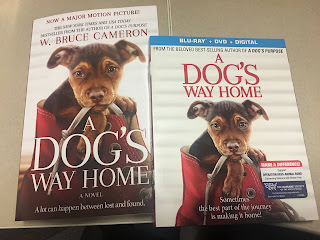 Based on the bestselling novel by W. Bruce Cameron, A Dog's Way Home releases on Digital March 26 and on Blu-ray™ Combo Pack and DVD on April 9 from Sony Pictures Home Entertainment. And I have a combo pack of both the Blu-ray™ and the novel to giveaway to one lucky reader!

What's it about? "The film chronicles the heartwarming adventure of Bella, the brave and adventurous dog that embarks on an epic 400-mile journey home after she is separated from her beloved human, Lucas. A Dog's Way Home highlights the power of unconditional love between man’s best friend and its human companion. The film stars Ashley Judd.

A Dog's Way Home arrives with adorable extras including a DIY guide to creating your own tasty dog treats at home and several deleted scenes. Also included are interviews with novelist W. Bruce Cameron, director Charles Martin Smith and cast and crew as well as a heartwarming look at the film’s canine star Bella’s rags to riches journey from the shelter to the big screen.

A Dog's Way Home has a run time of approximately 96 minutes and is rated PG for thematic elements, some peril and language." Check out the official trailer here.

Read the book and want to see the movie? Haven't read the book yet? Enter to win a copy of each using the Rafflecopter form below. Open to US only. Ends April 6/19.

I missed that movie at the theater - thanks for the giveaway!

This would be wonderful for my grandsons and granddaughters to enjoy. Thanks.

I would enjoy watching this with my daughter.

I still havent seen this movie yet looks so good though

A great way for the whole family to enjoy this book.
Theresa N
weceno at yahoo dot com

This would be great for my classroom bookshelf. Thanks!

I am a total dog person, so I love books and movies like this one!

Thanks! Who doesn't love a book or a movie with a dog in it?

My son and I are both dog lovers!

I have not seen this film about a puppy-dog!

I hope that I never have to worry about either of my dog being missing. Also they are both so spoiled that I don't think that they would do so good in the wild on their own.

I've been meaning to see this one :)

This movie and book would make a perfect gift for dog lovers. Bernie Wallace BWallace1980(at)hotmail(dot)com

cute movie for the family to watch

This movie looks so heartwarming.