The Wolf and the Watchman - Niklas Natt och Dag 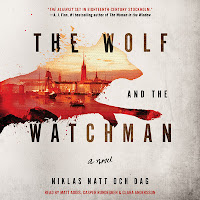 The Wolf and the Watchman is Niklas Natt och Dags's debut novel. It was named the Best Debut of 2017 by the Swedish Academy of Crime Writers and is being published in thirty countries.

1793 Stockholm. Mikel Cardell is a watchman, though he rarely performs his duties. He's woken from a drunken stupor one night when two children find a body floating in a local lake. Cardell drags what is left of the body out. The corpse has been brutally and strangely mutilated. The 'incorruptible' lawyer Cecil Winge is tasked with identifying what's left of the body. His health is tenuous and time is of the essence, so he  asks Cardell to assist him.

I was hooked from the first pages. Cardell is perfectly drawn - a strong personality but flawed, tenacious, intelligent, quick with his fists but kind and more. Winge also sprang to life for me - his measured pace of thinking and acting is the opposite of Cardell. He's clever but lacks the brutality of Cardell. The two make the perfect team.

I went into the book expecting a mystery - but Niklas Natt och Dag takes his story places I hadn't expected. There are four parts to the story. The body is identified, but then the narrative switches to the person responsible and again to another person named Anna-Stina. I couldn't fathom how her narrative would figure into the murder. And finally the pieces are fit together in the end. Niklas Natt och Dag's plotting is brilliantly complex - and such a treat to listen to.

Human nature, relationships and what we'll do to survive is also explored alongside the mystery.

The backdrop of 1793 Stockholm is so richly described - I could picture the filthy streets, the workhouses, the wealthy clubs and mansions, the pubs and more as I listened.

I did choose to listen to The Wolf and the Watchman. There were multiple readers which I really enjoy. Matt Addis, Casper Rundegren and Clara Andersson. The voice for Cardell is wonderful - rich and full with a gravelly tone. It matched the mental image I had created. The voice for Winge matches the character as well, more thoughtful and measured. Both were clear and easy to understand. The voice for the perpetrator was younger sounding. I found the sibilant esses used for the Swedish accent to be a bit annoying after awhile. The voice for Anna-Stina was just right as well - a younger tone that captured her desperate plight, but also her strength. This reader spoke cleanly and was easily understood. I always feel more immersed in a book when I listen to it. And this was most definitely the case with The Wolf and the Watchman. Listen to an excerpt here.

Those who enjoy Swedish noir steeped in historical fiction will enjoy this book. A caveat for gentle readers - the crime is somewhat gruesome. But the writing is excellent.
Posted by Luanne at 7:00 AM