The Stranger in the Woods - Michael Finkel 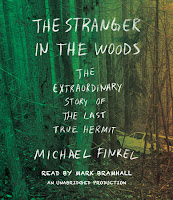 I remember being fascinated by the story of Christopher Knight when I heard it on the news. When I saw that Michael Finkel had released a book about Knight, (a New York Times bestseller) I knew I wanted to listen to it. The Stranger in the Woods: The Extraordinary Story of the Last True Hermit.

Knight was twenty years old when he left everything he owned behind and disappeared into the woods in Maine. He survived the weather, the isolation and more until the day he was 'caught' twenty seven years later, during one of the break-ins he committed to obtain the food and goods he needed to survive. There are many questions - why would he choose to disappear and how in the world did he survive?

Finkel found answers (and more questions) through interviews with Knight as he writes about his life before he left, his time in the woods and his struggle to reintegrate into society.

I am always fascinated by real life stories. Stories that almost seem too fantastic to be true - but are.

Knight is reluctant to talk about himself and to reveal much about his thinking. But what he does express will make the reader think. And wonder if they could have done what he did.  Finkel expands his book with stories of other hermits, religious and historical loners and those of others who have chosen to live apart from the world.

The narrator was Mark Bramhall. He did a great job with the Maine accent and conveying Knight's taciturn manner of speech.

I didn't love this one the way everyone else has.