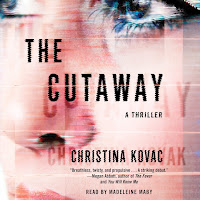 Washingon, DC. Attorney Evelyn Carney goes missing after an argument with her husband at a local restuaurant. Despite there being no evidence of a serious crime, the Criminal Investigations Division has immediately taken charge of the case. Virginia Knightly is an executive producer at a struggling news station. Desperate for a story to bolster ratings, Knightly becomes fixated on the case and begins investigating on her own.

Setting the novel in 'Washington opens up lots of avenues - corruption, political ambitions and machinations.

Kovac has taken her experience working in the television news industry and put it to the written page. The details and tone of the novel benefit greatly from that insider knowledge. That drive to get the story, beat the competition and the personal drive to be the face of the news figure prominently into Kovac's plot and characters. I liked the details of the processes going on behind the scenes.

Virginia's personal life is fairly detailed as well. But, I somehow just didn't find myself connecting with Virginia though. Some intimate detail is needed when drawing a character, but in The Cutaway I found myself more interested in the front of the story, rather than the behind the scenes life of the lead.

I chose to listen to The Cutaway. The reader was Madeleine Maby. She has an well modulated voice and uses inflections effectively to illustrate the novel with her voice. I did find that her voice for all characters to be somewhat the same though. A simple lowering of tone is the signal that another character is speaking. And her tone is somewhat 'full' if that makes sense. It's not as crisp as I would have liked.

It was the publisher's description that drew me to listen to The Cutaway. "The Cutaway draws you into the tangled world of corruption and cover-up as a young television producer investigates the disappearance of a beautiful Georgetown lawyer in this stunning psychological thriller, perfect for fans of Paula Hawkins and Gillian Flynn." While I don't think Kovac is quite there yet, I enjoyed The Cutaway and thought it was a solid debut. More mystery than thriller but a nice whodunit with some twists and turns along the way. Listen to an excerpt of The Cutaway. Read an excerpt of The Cutaway.
Posted by Luanne at 7:00 AM

It sounds like it's worth reading for a peek into the news business if nothing else.

I'd like to read this one. Thanks for the review.