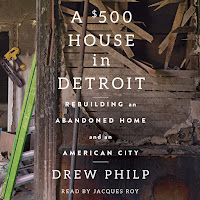 I was born across the river from Detroit. As a child we often crossed the border to shop. I watched the fireworks on the river and my male relatives loved checking out all the new cars that Detroit was producing. Driving the tunnel under the river was an adventure.
That was many years ago and as everyone knows, the boom went bust for Detroit. We've read about Detroit's problems in the news, but what about the regrowth that is happening? Or the people that never left? Drew Philp. is one of those who believes in the city and wants to part of the regrowth. His book is called A $500 House in Detroit: Rebuilding an Abandoned Home and an American City.

Yes, fresh out of college, he bought a $500 abandoned house in an east Detroit neighbourhood called Poletown. He knows no one, has no steady job when he arrives, no money in the bank and is white. Poletown is predominantly a black community.

What follows is an absolutely fascinating memoir. Philp details his journey to rebuild the house bit by bit, by himself, as he can afford to. I used the word community above - and that's what he finds Poletown to be. There is crime, abandoned buildings, racial tension etc - but there is so much more to this neighbourhood. There are those who have persevered, those who believe as Drew does that the neighbourhood and city can be saved. We also learn the history of the downfall of this once great city and what contributed to it. I admit to be quite surprised (and appalled) by some of the facts presented.

I love old houses and rarely pass an abandoned house without exploring. Old houses have charm, personality and history. Personally though, I cannot imagine doing what Drew did. However, I am envious of his drive and appreciate his conviction and beliefs. And as Drew's belief in his community grows, so does he personally.

Philp's words flow so easily and his narrative is such an addictive listen. The audiobook narrator reader was Jacques Roy. His voice is well modulated and easy to listen to with a nice little gravelly undertone. The matter of fact tone to his voice seems to interpret Philp's prose and story as it was meant to be. Factual, but with conviction and feeling. Listening to a book seems to draw you deeper into the narrative.

As much as I love reading fiction, real life is so much more interesting. Absolutely recommended! Listen to an excerpt of A $500 House in Detroit.
Posted by Luanne at 7:00 AM