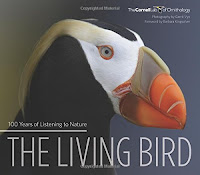 What books caught my eye this week as they passed over the library counter and under my scanner? How could that cover not catch your eye?! Wings and hooves this week......

First up is The Living Bird: 100 Years Of Listening To Nature by Gerrit Vyn.

From the publisher, Mountaineers Books:

The Living Bird explores the relationship between birds and people through over 250 images by wildlife photographer Gerrit Vyn and thought-provoking essays by some of the world's leading naturalists and bird enthusiasts. The book also marks the 100th anniversary of the Cornell Lab of Ornithology, a world leader in the study, appreciation, and conservation of birds. Captured in terrain both exotic and familiar--the Yukon Delta, a woods in Arkansas, a remote village in Russia's Arctic, and even urban Seattle--Vyn's remarkable photographs illustrate nearly 100 North American bird species. The exhilaration of migratory Whooping Cranes, the fragility of the endangered Spoon-Billed Sandpiper, and the wide-eyed beauty of Great Horned Owls all come alive on the page. From enjoying backyard Black-capped Chickadees and Yellow Warblers, to wondering over a Pileated Woodpecker, or to admiring the powerful soar of a Gyrfalcon, The Living Bird educates and inspires."

Next up is Lesser Beasts: A Snout-to-Tail History of the Humble Pig by Mark Essig.

From the publisher, Basic Books:

"A globe-trotting history of the domestic pig, showing how this humble and oft-maligned beast has helped humans to survive and thrive from the Neolithic Period to the present day. Unlike other barnyard animals, which pull plows, give eggs or milk, or grow wool, a pig produces only one thing: meat. Incredibly efficient at converting almost any organic matter into nourishing, delectable protein, swine are nothing short of a gastronomic godsend—yet their flesh is banned in many cultures, and the animals themselves are maligned as filthy, lazy brutes.

An expansive, illuminating history of one of our most vital yet unsung food animals, Lesser Beasts turns a spotlight on the humble creature that, perhaps more than any other, has been a mainstay of civilization since its very beginnings—whether we like it or not."