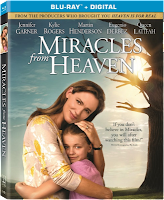 I'd heard about  Christy Wilson Beam's book when it crossed over the library counter. I had a quick glance at it as I signed it out for a patron, but never got around to reading it myself. But, when the chance to view the movie of Miracles From Heaven was offered, I happily accepted.

Based on true events, Miracles From Heaven tells the story of Annabel Beam - a young girl suffering from a rare digestive disease. An accidental fall finds Annabel miraculously cured after her rescue.

One of my favourite actresses, Jennifer Garner, plays mom Christy in the movie. I just like Garner, her acting, her choice of roles and her genuineness. I thought she was a great choice for the lead in this film. The rest of the casting was great as well - Queen Latifah is always a treat, Martin Henderson as Kevin Beam conveyed his unwavering support and faith perfectly. Kylie Rogers as Anna does a great job - she has such an expressive face and eyes. John Carroll Lynch was inspiring as Pastor Scott.

I was crying in the first half hour of the film, saddened by Anna's plight, Christy's frustration with the medical community who took forever to diagnose her condition and empathizing with having a sick child.

Miracles From Heaven is yes, about a miracle - but it's also about faith. Faith is a large part of the Beam family's life. But, Christy loses her faith when Anna falls ill, unable to understand how God would let a child fall so ill. Remarks and reactions from some of the congregation have her refusing to attend church. She finds herself unable to even pray. Kevin and the other two daughters hold fast in their belief - as does Anna. She herself never wavers - knowing there is more. There are some great conversations and scenes that explore belief and some of those hard questions.

Miracles From Heaven is an extraordinary story, offering the viewer a chance to reaffirm their belief in a higher power, or an opportunity to explore the idea that yes, miracles do exist. There's a great quote from Albert Einstein used in the film:

There's some great music in the film as well - particularly in the church scenes featuring the band Third Day. And for a sneak peek at the movie, check out the trailer below. Great family viewing too.

"Movie has been provided courtesy of Sony Entertainment Canada and Graf-Martin Communications, Inc."
Posted by Luanne at 6:59 AM