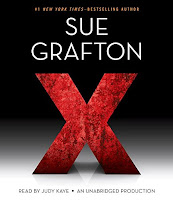 Author Sue Grafton has made a commitment to see her series featuring private investigator Kinsey Millhone through to the end of the alphabet. I read the first book, A is for Alibi, back in 1982, enjoyed it, and decided I would complete the series as well.

The latest is simply called X. (Yup, only two more to go)

In Kinsey's world it's only 1989. She's working cases using the 'old' gumshoe methods of surveillance, telephones (and payphones), calling in favours and contacts. It's quite fun to watch her solve cases 'the old fashioned way' without computers.

This latest entry brings back a former P.I. and case from Kinsey's early days. Pete is dead and a carton of his old files reveals a hidden list of women's names. The connection - a cold hearted man. Could he also be a cold hearted killer?

Picking up the latest Kinsey book is like settling down to catch up with an old friend. These characters are familiar, welcoming and comfortable. Kinsey herself is engaging and endearing. Not to mention dogged and determined. I'm also quite taken with the supporting cast - Kinsey's octogenarian landlord Henry and his extended family.

In addition to the main plot, there's a second one involving a bitterly divorced couple. This plot felt extraneous to me, like an add on to fill out the book. I never became truly invested in this plot line. There is a third involving Henry's new neighbours and water conservation. This one I loved!

Although the books have a crime in each and often a dead body, they're not overly graphic. I found myself a little taken aback by one element of the cold-hearted guy's MO. It seemed like a bit of a shock after the relatively sedate investigation to that point. The other thing I noticed was the level of described detail - a bit too much of the mundane.

As the series winds down, I wonder if the loose ends of Kinsey's romantic life will be tied up. I thought we might her get back together with Cheney Phillips. Wishful thinking maybe!

I've actually chosen to listen to the last few books on CD. Kudos to the publisher for using the same narrator for all of the book. Judy Kaye's voice has personified the mental image I've created for Kinsey. It's got a nice little rasp to it. Kaye also has great inflection and interpretation. Listen to an excerpt of X.

This isn't my favourite of the series, but it was still an entertaining listen on the drive back and forth to work.
Posted by Luanne at 7:00 AM

I have a few to go in the series before I get to this one. I do love Kinsey!