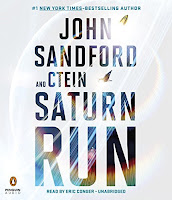 I am a big fan of John Sandford's 'Prey' series featuring Lucas Davenport as well as the Virgil Flowers novels.

Saturn Run is a bit of a departure for Sandford - it travels to sci-fi territory - not a usual genre for me. But I definitely wanted to give it a try.

It's the year 2066. Sandy, a low level intern watching the screens notices something approaching from the direction of Saturn - and it seems to be a ship. A spaceship with far greater technology than the US and China have.  And each country wants it.....the race is on  - who can get a ship to Saturn first?

John Sandford's style and voice is easy to hear in Saturn Run. Sandy is an incarnate of Virgil Flowers - I quite enjoyed his attitude and style. There's a myriad of other characters, each with detailed backstories. Saturn Run is most definitely a group effort.

I chose to listen to Saturn Run. The reader is Eric Conger - one of my favourites. (He's also the reader for the Virgil Flowers audio books) As always, he's got great inflection, expression and timing. And his voice is just plain great to listen to.

But. And yes there's a but. I got so bogged down in the details of the ship and what was needed to make it run, long-winded explanations of picture taking, nuke reactors and more. Enough that I finally pulled the plug and quit. I feel bad doing that to an author I follow faithfully (and it's rare for me), but I was zoning out, hoping the details would pass quicker so we could get back to the characters and the race to Saturn. I'm in the minority on this one I think. Listen to an excerpt of Saturn Run or read an excerpt of Saturn Run.

Instead, I'll be waiting for the 26th Lucas Davenport book, Extreme Prey, releasing in April 2016.

And who is the co-author, Ctein? According to the publisher, he's an 'internationally known photo-artist and science fiction aficionado.'
Posted by Luanne at 7:00 AM

This sounds like one I would quit too :( I feel terrible when that happens! Not too often though since the world of Kindle samples.. But sometimes the beginning of a book can fool you.