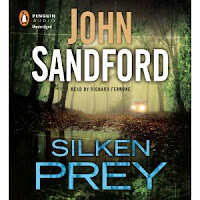 We know who the culprit is from the beginning. The fun lies in following along with Lucas and his team as they try to figure it out. Shrake, Capslock, Jenkins and......yes that ****ing Flowers are all on the case. (I just wait to see when someone is going to utter that phrase!) One of Sandford's other recurring characters, computer whiz Kidd, also plays a large role in Silken Prey.

I enjoyed the political machinations in Silken Prey. The ending has left the door open for a further confrontation with one of the senators. The secondary plotline with Kidd and his wife was excellent. I thought the way the two came together was great fun.

I chose to listen to this latest book on the way back and forth to work (a disc each way works out pretty good!) The reader was Richard Ferrone. He's got a wonderfully gravelly, raspy voice that works so well for the image I have of Davenport. He comes up with different and believable  voices for the rest of the players as well. I was able to easily know who was 'talking'. By listening to the book, I really 'heard' the snappy dialogue Sandford has written. Some of the best scenes are between Lucas and his team.

I have read every last entry in this series, and the others Sandford writes, as well. There have been some I've liked better than others, (I quite liked this one) but even after twenty three entries, I still really enjoy this character. I'll be waiting for number twenty four. Listen to an excerpt of Silken Prey. Or read the same excerpt.

I love Lucas too!