A Conspiracy of Faith - Jussi Adler-Olsen 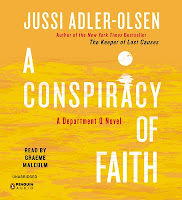 You many remember me raving about the first two books in this wonderful series. (The Keeper of Lost Causes  and The Absent One) The third book in Jussi Adler-Olsen's series has just released in North America - A Conspiracy of Faith.

Detective Carl Morck works for Department Q - housed in the basement of the Denmark Police Department. Department Q deals with old and cold cases. The department isn't very large - it's Carl and Assad - an enigmatic Syrian who started off as the cleaner, but has proven to be invaluable to Carl. They have been joined by Rose - and her sister Ursa this time 'round - both decidedly 'different'.

Adler-Olsen hooked me right from the start. A pair of boys is being held captive in a remote boathouse. The older brother knows they are going to die, but ingeniously manages to put together a message in a bottle and toss it through a crack into the ocean. Years later the bottle finally makes it's way to Carl's desk. And the hunt begins for a killer.

Now, we as readers, know who the killer is - and that he is still operating. His chapters are especially chilling. Adler- Olsen paints a particularly frightening picture of a sociopath. The hunt is on and we can only urge Carl and team to hurry - another pair of children are being held in the same old boathouse.

Adler-Olsen's plotting is excellent and the action and sense of urgency translated into late night reading for me. But what makes this series really shine are the protagonists. Carl is a brilliant investigator but is a man with a complicated personal life. The secondary storyline gives him more depth as a character, rather than just confining him to the police station. Assad is still a mystery, but Adler-Olsen has let a few more details slip about this intriguing character's background. The interplay and dialogue between the two pulls the reader in.

I've read the first two books, but chose to listen to this third entry. I didn't realize who the reader was until the opening lines of the first disc - then realized it was one of my favourites - Graeme Malcolm. He has such a rich, full sonorous voice. He has a Scottish accent, but bends it to fit Carl's personality. The voice he chose for Assad also worked well. Malcolm uses his voice very effectively - the killer's mind set was all the more chilling with the dispassionate tones employed. His voice was easy to listen to, extremely expressive and really brought the book to life.

A five star read and series for this reader.  I can't wait to read the next Department Q book! See for yourself  - read the prologue of A Conspiracy of Faith.
Posted by Luanne at 8:30 AM

I listened to The Absent One and wasn't crazy about the narrator so I'm glad to see they're using a new one with this book.