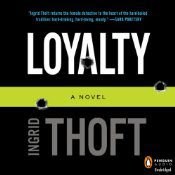 Fina Ludlow lives and works in Boston for the family firm. Law firm that is. Her father and three brothers are all attorneys but Fina bucked tradition and became the firm's private investigator.

When Fina's sister-in-law Melanie goes missing, patriarch Carl Ludlow sets Fina on the case. The police department's prime suspect is her brother Rand - Melanie's husband. But there's no way Rand would have killed Melanie. Right? As Fina digs into Melanie's life, someone else is just as determined that she drop the investigation.

But that's just like a red flag to a bull for our protagonist. Thoft has created a mentally and physical strong, tough, wise-cracking character who seems to thrive on antagonism. But, she has some soft spots underneath that tough exterior. Thoft mixes in healthy doses of family dynamics of all shades - hence the 'loyalty' title.

Thoft starts things off with a bang, with lots of characters rapidly introduced in the first few chapters. I did find myself backtracking a bit, until I got who was who straightened out. I'm thinking this is the first in a new series, so it seems like Thoft was simply setting the stage.

Fina is a strong personality. I immediately liked her  and appreciated her personality, determination and fearlessness. But by the last third of the book I thought this had been firmly established with the reader and found it a bit tiresome to be reminded of this again and again through comments from supporting characters.

Loyalty was well plotted, with lots of action, (how many times can Fina get attacked!?) some humour and yet some serious moments as well. The end result can be seen from several chapters away, but that didn't detract from enjoying the journey there.

I chose to listen to Loyalty. The reader was Rebecca Soler. I must admit, I wasn't sold on her as a narrator at first. Her voice seemed very young - almost teenaged. When I looked up other books she had narrated, I found she has read several young adult titles - it was Cinder I was remembering. But once I started forming a picture of the character, the voice worked. Soler has a very expressive voice and her interpretation of Fina's snappy dialogue was excellent and suited this sassy, shoot from the hip P.I. As I mentioned, there are many players - Soler gave each a distinctive voice and/or accent so I was able to easily know who was talking. (The southern madam was particularly good) She has a clear voice that made it easy to catch every word. (Gentle listeners be warned - there is a fair amount of swearing sprinkled throughout)

Fina is a great new personality on the female P.I. front - a cross between V.I. Warshawski and Stephanie Plum. I'm sure there will be more cases for this intrepid investigator. This was a great summer read for this listener - many a pint of raspberries was picked during the 12 hours of running time! Listen to an excerpt of Loyalty. Also available in hardcover - Read an excerpt.
Posted by Luanne at 8:30 AM

This is the 3rd review I've read of this book and every one has been great. This sounds like a book I need to try.

I read this book and it is very good!