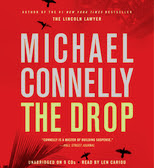 Harry Bosch returns in Michael Connelly's latest book - The Drop. Harry has three years left until mandatory retirement kicks in. He's working in the cold case squad now. When he and his partner Chu get a DNA hit from a twenty year old sample, they think a mistake has been made. The perp is in the system, but he would have been eight years old at the time. But just as they start investigating further, they are told to drop everything to investigate the death of a prominent city counciller's son. The summons comes from the top - Harry calls it 'high jingo' - there are political factions at war and work here. But of course, Harry works both cases.

Although I've read everything Connelly has written, this is the first of his books that I've listened to. Len Cariou was the reader. At first I found his slightly sibilant esses annoying, but as I got further into the story, I didn't hear them. His voice is rough and gravelly and immediately brought to mind the mental image I have of Harry. He also handled the other roles well, providing a different voice for each character.

The Drop had two great cases as the primary story lines. But it also has secondary plot lines involving Harry's personal life, notably with his daughter Maddie. I am enjoying Harry as a dad. Really, I can't say much more than The Drop is classic Connelly - an excellent read with a character  I am quite partial to. And Connelly has left it open for another book with Bosch.

Listen to an excerpt of The Drop. Or read an excerpt. You can find Michael Connelly on Facebook.

I can't wait to read this one, sounds so captivating. Great review.

Sounds good! I haven't yet read Connelly but I saw the movie Lincoln Lawyer and enjoyed it. I must pick up one of his books soon!

Marce - Really I can't say I've ever not enjoyed a Michael Connelly book!