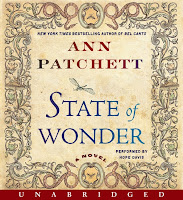 I've had numerous friends and patrons tell me that I must read Ann Patchett.  There's been so much buzz around her latest book, State of Wonder, that I took advantage of an opportunity to listen to it in audio book format.

Dr. Annick Swenson has been working in the deepest jungles of Brazil for over 30 years, following in her former professor's footsteps. They have found an Amazonian tribe whose women give birth as late as their seventies. Drug company Vogel has been financing this venture for many years. Dr. Swenson rarely responds to Vogel's requests for updates. So Vogel sends down one of it's own - Dr. Eckman - to get answers. And then another - Dr. Marina Singh - to find the first.

I could go on and on about the plot - but's it's enough to get you to the Amazon and have an idea. Any more would be a spoiler. Sometimes literary fiction can become too self absorbed for me and feel like a bit of a slog. Not so in this case. I had no idea where Patchett was going to go next with the story - I found myself sitting in my driveway in the dark to finish a disc. (I'd been listening on the way back and forth from work)

The settings came to life - the heat, the insects, the lush and overpowering jungle. Patchett's writing is lush as well. I was truly glad I listened to this book. I don't think I would have become as invested in the story in the written form. Patchett's prose are beautiful, but the reader - Hope Davis - was phenomenal and brought Patchett's words to life. Her voice suited the character of Dr. Singh, expressing her emotions and thoughts perfectly. Davis's voice is rich and well modulated, always evenly paced. She depicted all of the characters very easily with her voice. Dr. Swenson's clipped tones and the Aussie character's accents were spot on.

Lots of themes populate State of Wonder - self discovery, western vs. third world countries, hope, love and more. There will be inevitable comparsons to Joseph Conrad's Heart of Darkness.

I really enjoyed State of Wonder and can see why Patchett has such fervent fans. I would have given this a five star rating, but the ending left me a feeling somewhat unsatisfied and cheated. It seemed to happen in a rush after such a deliberate slow building story. I found myself wanting to know what happened 'after'. Although this could be a good thing as well - an author who leaves you wanting more.

I still have never read her work but this makes me want to the more and more I read about it. I'm sorry the end sort of failed, though.

I was disappointed in the ending of this book too. It just seemed out of character to me.

This was my first Ann Patchett - and I did enjoy it even though it is not my genre. But I was totally disappointed by the ending. I agree that even if she left the ending as is, she should have included an "after".