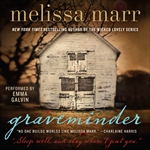 It was the cover of Graveminder that first encouraged me to pick up Melissa Marr's latest book. I love abandoned buildings and found this old structure quite appealing. Marr is an author I was unfamiliar with, but she is known for her Wicked Lovely series, aimed at young adult/teen readers. Graveminder is her first adult novel.

Rebekkah Barrow has returned to the town of Claysville for the funeral of her beloved grandmother Maylene. Most folks don't ever leave the town....and if they do, they are inexplicably drawn back. For the town has made a deal with the dead. A graveminder and her protector - the undertaker - will take care of the dead and make sure they don't wander. And that was Maylene's job. But now that job has fallen to Rebekkah and her new undertaker, Byron Montgomery.

This isn't my usual genre of read, but I was curious to see what Marr had imagined. I found her depiction of an entire City of the Dead quite imaginative, populated without drooling bodies (although there are a few of those up top) It is those dead in Claysville that are the problem that the new graveminder and undertaker must deal with. Who has undermined the contract and why? Someone alive or dead?

I chose to listen to this book. The reader is Emma Galvin. Her voice is quite expressive with a gravelly quality that adds to her reading. I enjoyed her interpretation. But, she does sound young and on further investigation found that she has narrated pretty much only YA novels. If Marr's intention was to separate Graveminder as an adult book, perhaps an older sounding voice would have been more appropriate. I found some of the dialogue a bit repetitious and don't think I would have noticed it as much in written form. I also found Rebekkah and Byron's interactions somewhat 'teenish' and not that of two adults.

It's always good to step outside our comfort zone. For me, fantasy isn't a place I go very often, but I enjoyed Graveminder as something different for me.  Fans of YA books will love it.  I was fascinated by the City of the Dead and think that Marr could find more stories to write about there.

See what you think - read an excerpt of Graveminder or listen to an excerpt.

Can't wait to get to this book, encouraged by your review!

I don´t read much fantasy either, but the cover and your review have made me rather curious about this one.

Been wanting to read this one too. Thanks for the review. Melissa Marr is a fantastic writer.