I first discovered  Jennifer McMahon when I reviewed  her novel, Island of Lost Girls, back in 2008.

Her latest book, Don't Breathe A Word, is a page turning thriller, drawing again  on the exploration of past influencing present, and how childhood beliefs shape the future. But, boy oh boy, does she do it in a very creepy fashion!

Fifteen years separate the two stories being told. In the past, Lisa, her brother Sam and cousin Evie all lived in the small Vermont town of Harmony. They often played in the woods behind their house. And in those woods there once was a small village called Reliance. All that is left are the stone foundations. Or is it? It is said that all the residents simply vanished one day, leaving only a baby crying in his cradle - Sam and Lisa's great grandfather. And then Lisa vanishes too....


"Three nights ago, she went into the woods behind her house and never came out again. She said there was a door in those woods, somewhere in the ruins of an old town long abandoned. She told her little brother she'd met the King of the Fairies and he was going to take her home to be his queen."

Phoebe is just drifting through Harmony that day and follows a strange little girl into the woods to 'just have a look'.

Fast forward 15 years. Sam and Phoebe are lovers, a chance meeting bringing them together before Phoebe realizes who Sam really was. When Lisa's 'fairy book' resurfaces and they start receiving calls from someone claiming to be Lisa, the past is reopened, re-explored and remembered in alternating chapters, past and present.

When we're little we pretend there are fairies and fairytales enthrall us. But some of them are frightening as well.


"You know how sometimes, sometimes when you're just sitting there, you catch this movement in the corner of your eye - just a shadow, really  - and you blink, sure you imagined it?"

What if those tales were based on reality? Or could it be some lowlife using those tales to lure a girl away? 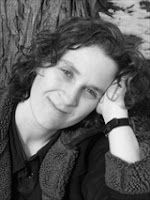 I have to say that McMahon kept me guessing right up until the very last page. One moment I was convinced the story was headed one way, only to be proven wrong in the next chapter. A truly odd mixture of suspense, thriller, mystery and fantasy. But intriguing? Oh yes!

On a side note, I've always been intrigued by McMahon's choice of cover art. All of her novels involve children and each cover has featured a child with striking eyes that seem to look right at you.

Read an excerpt of Don't Breathe a Word. You can find Jennifer on Twitter.

Check out what others on the TLC tour thought. And remember - fairies lie.

I love this woman (and her books) so much! I've always been able to rip through them....had to in fact. They're so gripping. Love it!

Glad to know this was a thrilling read. I just sort of skimmed your review from there as I have yet to read the book. Have a wonderful week, Luanne.

The cover made me think this book would be creepy and I'm glad to see I was right. This sounds good to me.

My, this one sounds compelling! A wonderful review.

Pam - they're all just a little bit left of centre aren't they - but good!

Kaye - let me know what you think when you finish. Have a great week as well!

Dorte - thanks - it kept me off kilter all the way!

This isn't the kind of book I usually read but I've seen so many fantastic reviews that I've decided to give it a chance - it is the book I'm picking up as soon as I finish my current read.

So glad you enjoyed this one! Thanks for being on the tour. I featured your review on TLC's Facebook page today.

I think the covers really draw you in. Definitely eye catching. And creepy is the exact word to describe this book.

This is an odd book, I kept reading and enjoyed it (didn't love it but enjoyed it).

I must admit I'm drawn to McMahon's books, despite the fact that I generally don't like creepy books very much!