Tami Hoag returns with her new book - Secrets to the Grave - another chapter in the lives of the characters originally introduced in last year's thriller Deeper Than the Dead.

Secrets to the Grave opens with a brutal murder scene...

"She lay discarded like a life-sized broken doll - made up, torn up and cast aside, her brown eyes cloudy and lifeless. Beside her lay a smaller doll - her child - head resting on her shoulder, face streaked with the last of her mother's life's blood.


The telephone receiver dangles near the floor, stenciled with small bloody fingerprints. The last words spoken into it were a whisper still hanging in the air: "My daddy hurt my mommy..."
The she in the tableau is Marissa Fordham. Marissa and her daughter Haley were recent additions to the population of Oak Knoll, CA. With a local wealthy patron, Marissa had been making her living as an artist.


Detective Tony Mendez is the lead on the case. He calls in child advocate Anne Leone to protect four year old Haley's interests, with the hope that the child can give them something to go on. Anne herself is still recovering from the brutal attack on her life by the See No Evil killer that terrorized Oak Knoll last year. She is a newlywed, having married Vince Leone, the FBI agent called in to handle that case. Mendez calls in Vince as well to help him with this new horrific case. Their investigation uncovers no records of a Marissa Fordham ever existing before her arrival in Oak Knoll... who was she really, who would have wanted her dead, who is the child's father? Could this case have ties to last year's brutal murders?
I really enjoyed the characters introduced in Deeper Than the Dead and was thrilled to see that Hoag had reprised them and carried on with the story of Oak Knoll. The neat thing is that these books are set in 1986. So, forensic methods and tools such as DNA banks as we know them from current tv shows and current headlines just don't exist yet, although they are hoped for. Mendez and Leone must use 'old fashioned' methods to investigate. I quite enjoyed the 'historical' references to movies, style and culture inserted into the story.

Hoag has created a multi level plot with some red herrings, but also some subtle clues tucked in if you read carefully. Watch for those sneaky little sentences at the ends of the chapters. Details are teased out from each character on the way to the solution - it seems that every one in Oak Knoll has secrets. Fair warning - the crime is somewhat gruesome in description,some readers may be offended. 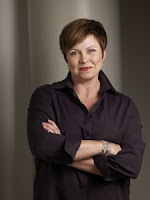 Hoag has crafted another fast paced, page turning thriller. And I like that the door has been left open for more from these characters! Read an excerpt of Secrets to the Grave.
Secrets to the Grave is on tour with TLC Book Tours - check out what other bloggers are saying.
Secrets to the Grave can certainly be read as a stand alone. But the references to the past case are tantalizing to those who haven't had a chance to read Deeper Than the Dead. So....thanks to the publisher Dutton, one lucky winner has a chance to win a copy of both books!! Simply comment to be entered. Ends Wednesday December 29 at 6 pm EST. Open to US and Canada, no po boxes please.

Count me in, Luanne! The Big Guy loves Tami Hoag. Well, her books, not her personally 'cuz he is all MINE!

It's been a long time since I've read a good murder/crime/detective type book. These sound wonderful. Thanks for the giveaway.
lcbrower40(at)gmail(dot)com

I have all of Tammi Hoag's books and I would so much like to win this one.

Please enter my name in the giveaway for the book. Thanks!

I have read all of her books, I would love to read this new one.
twoofakind12@yahoo.com

I have been waiting for Tami to release a new book! I can't wait to pick this one up and give it a good read. Tami Hoag was introduced to me when I had jury duty and have kept her on my list of favorite authors to keep track of.

I would love to be entered for this!

These sound great. Thanks for sharing!

bacchus76 at myself dot com

Thanks Bookworm! I'm so glad readers are enjoying these characters as much as I enjoy writing them.

I've liked everything I've read by her, please enter me.

Sounds fantastic! SO glad you enjoyed it. Thanks so much for being on the tour!

I would love to win these books.

Sounds fab!! Thanks for the chance to win!!

I love Tami Hoag, but haven't read these, so I'd love to win!

This is exciting! Definitely entering.

Wow! Fantastic giveaway because I hate to read a 2nd book without reading the 1st, first. I've heard wonderful things about Tami's work. Thanks for the chance to win these.

Oooh, I'd love to win! I love me some Tami Hoag! laura.kramarsky[at]womenofmystery[dot]net

Sounds like a great read. Thanks for the chance.

Please count me in, it sounds like a great read! I think the 1986 setting is interesting too, long before a lot of the forensics testing came along!
JHolden955(at)gmail(dot)com

That's great. I enjoy Tami Hoag's books. Thanks for the offer.

I'd love a chance to read this, it sounds fantastic.

Love her books, thanks for the chance

I have never read any of her books but these seem like a great start.

It would be nice to win them. I liked her book, A Thin Dark Line.

This looks like a great thriller for a cold winter evening.cardshark42(at)hotmail(dot)com

I love Tami Hoag's books! I have all of them, and am eagerly awaiting this one. Please enter me in this contest.

My wife and mother both like Ms. Hoag's books, so I'd pass them to them.

Please enter me. I really enjoy Hoag but haven't read these. Thanks :)
stacybooks at yahoo

Please count me in. I love free books and a Tami Hoag is what I need to cuddle up with in front of the fire.

Add me to the list. I enjoy Tammy Hoag and would enjoy reading this.
Mike Draper

I would love to win

I haven't read either book, and just the cover of this one looks intriguing!

Tami Hoag's books are wonderful.
My bookclub loves when her books come out and they are always our next read.
OcalaRose@aol.com

Love your review!! Ive read some of Tami Hoag's earlier books..but have not started this one yet..would love to win this book (then i would HAVE to buy the first one!)..

I'd love to read this book!

So generous, thanks! sbcashortie at hotmail dot com

Tami Hoag's books are terrific!
I'd love to win this book!
nicolesender@yahoo.com

Mysteries are my favorite genre of reading. Tami Hoag is the reigning queen of mystery

Please count me in. Many thanks.

I love Tami Hoag and would love to win!

Both of these books would be a truly awesome win! Love to read them.
pbclark(at)netins(dot)net

I'm ready for a good book!

I would really like to win these books---I haven't read a good Tami Hoag book in a long time.

I would love to win a copy of this book! Thanks for the chance.

I really am a Tami Hoag fan and would love to win these books. Happy New Year!

This sounds like the kind of book I love. I've written down her previous book to look up in the library.

Thanks so much for the giveaway!

This sounds really good. Thanks for the giveaway! wgbc1446[at]yahoo[dot]com

The book sounds awesome! Thanks for the chance to win! Happy New Year!
janicecrespo@gmail.com

Tami Hoag is awesome. Please count me in.

Longtime fan of Tami Hoag's writing. I would love to win two of her books that I haven't read. Thanks ybutler@oppcatv.com

Please enter me in to win

I would love the chance to read this.
shawnac68 @ hotmail dot com

I am a huge Tami Hoag fan and would love to read this
rhondastruthers atyahoo.ca

This is great, thanks so much!
beckytag618 at gmail dot com

Would love to read these. Thrillers are my favorite.
rsgrandinetti@yahoo(DOT)com

Not read either of these books. I do like a good mystery and a sequel makes it better!! Fun read for the winner! Thanks for the Giveaway!!

I've been hearing quite a bit about Tami Hoag but have never read any of her books. Would like to start with this one.

I love a good book

These books sound really good, and I think it'll be really interesting to read a novel set 20 years ago to remind myself how far we've come in forensic investigation.

I love mysteries! Thanks for the chance
mightynaynay(at)cs.com

It is so nice to see the chance to get both the books in a group--so often I end up with #2 or more and have to hunt to get the first one!

Thank you for the great giveaway please count me in :)
kathypease(at)gmail(dot)com

This sounds like a very interesting book. Thanks. garrettsambo@aol.com

I would love a chance to win. Thank you.

Sounds fabulous, like the kind you can't put down no matter how tired you are!

This would be great

Count me in. I would like to read this book .

This could be first on my list of 'to read' in 2011!
heatherpooh (hotmail)

I like Tami Hoag - I have read a couple of her books - great suspense writer :)

I love suspense and mystery-count me in!

After I lost my Husband to the horrible act of 911 I felt very alone and VERY depressed, that's when I bought my first Tami Hoag book, A Thin Dark Line and then I continued to read more and more of her, now I'm addicted and it did help keep my mind very much off of feeling such a lose. Hope I can be part of ur drawing. Thank Kerry