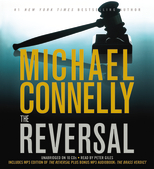 I've been a fan of Michael Connelly and his recurring character Harry Bosch since the first book - The Black Echo- in 1992. When Connelly introduced a new series featuring lawyer Mickey Haller, I was a little miffed that it wasn't a new Bosch book. I was wrong - I loved the Haller character just as much. Bosch and Haller have been appearing in each other's world over the last few books in each series and The Reversal finds them working together.

Haller has been asked to lead the prosecution in the retrial of convicted killer Jason Jessup. He has served 24 years for murder, but recent DNA evidence may clear him. Haller asks Bosch to be the investigator on the case. Out on bail, Jessup isn't acting like an innocent man....And the defense attorney is crossing all sorts of lines....

As always, the case is intriguing and the suspense builds.  I really enjoyed the courtroom scenes with Haller and the defense attorney verbally sparring. Connelly has taken Bosch is a bit of a different direction with the last few books. He has his daughter living with him and must now stop to consider her safety and well being first. It's a side of Harry that we haven't seen before. I thought the story would end differently, but upon reflection realized that it was right for the story.... and the stories that will follow.

I chose to listen to The Reversal in audio format. The reader Peter Giles was excellent. He has covered previous Connelly books and does an excellent job. His voice is calm and modulated for Haller, but changes to a rougher tone for Bosch, effectively conveying the difference between the two and capturing their personalities.


Another page turner for me, one that had me driving just a little slower on the way home from work, so I could start another disc. Connelly remains firmly on my must read list with both series. Listen to an excerpt of The Reversal. Or read an excerpt. I can't wait for The Fifth Witness due out in April 2011.

I haven't read this one yet, but I do love Connelly's work, so I definitely will.

But you did remember to drive home?

I wouldn´t dream of listening to a book in my car. I know that either I would focus on the traffic and not hear a bit of the story - or the story would be so engaging that I´d forget everything about the traffic.

So I´d better stick to paper books or ebooks as usual.

I've not read Michael Connelly's writings before and I find the story line very appealing. Thank you for the giveaway and the chance to win this interesting book. I hope I do.