In the National Parks - Ansel Adams 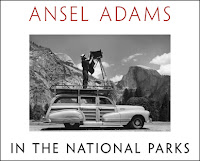 I was fortunate enough to review Ansel Adam's In Colour last year and was eager to read the newest release - In the National Parks.

Adams travelled and photographed forty national parks during his 50+ year career. This newest volume contains over 50 photographs never before published.

Ansel is one of the greatest photographers in the world. His stunning pictures are all the more incredible as he worked with what we would now consider 'basic' equipment. Prints were developed by hand, a skill he excelled at. His black and white work is instantly identifiable.

"For Ansel, the creative process began at the camera but did not end until he felt a sense of satisfaction in the darkroom. His photographic prints are a personal intensification of what was in front of the camera. They reveal not only the photographic process, but also the photographer." To quote Adams - "A photograph is made, not taken."

Ansel was an ardent proponent of preserving 'America's wild places.' Through his photographs, campaigns, and Sierra Club activities, he was successful in his raising awareness and affecting change.

As I slowly perused each page, I was struck by the beauty of each and every photograph. Stand outs for me were Redwood Stumps and Ferns/California on Pg33 and  Forest/Alaska pg186 . These two images radiate movement and fairly leap off the page. The play of shadows in Grand Canyon/Arizona 1942 on pg35 was breathtaking. It accentuated the timeless and enduring quality of the stone. The detail captured in the waves and mist of Grand Prismatic Spring/Wyoming pg36 is again a testament to Adam's skill with a camera, but also his ability to see the beauty in our natural world. I think perhaps my favourite shot is Aspens at Dawn/Colorado 1937 on pg66. The lighting makes the trees look so eerily beautiful.

Accompanying many of the pictures are letters from Adams, setting the time and place, along with his thoughts. Also included are essays from Andrea G. Stillman and essays by Wallace Stegner, William A. Turnage of The Ansel Adams Trust, and journalist and critic Richard B. Woodward. These are intriguing as well, describing Adam's thoughts, actions and processes. Also included at the end are selected additional notes for certain images.

"Ansel often said ' I go out into the world, I make a photograph, and I give it to you as the equivalent of what I saw and felt."

Thank you. These timeless images are a reminder of the beauty of our natural world. And why we need to look after it.

Adams was such a genius - I bet this book is gorgeous!

This looks like an awesome book. I love photography and art books though, so I was already interested in this one. :)

Awesome review! I love this book. It felst like Christmas when I received it for review. It's on my coffee table now and I pick it up often to leaf through the pages.