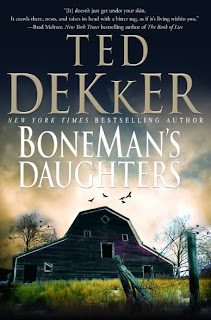 Ryan Evans is a Naval Intelligence officer dedicated to career and country. He has spent numerous years away from his wife Celine and his daughter Bethany. When he returns to the US he is determined to repair his relationships with his family. But when he arrives he finds they no longer want him in their lives. His place as husband and father has been usurped by the local District Attorney Burt Welsh. Welsh attained his position by successfully prosecuting the serial killer nicknamed BoneMan. BoneMan kidnaps young girls, looking for a daughter.When they don't fit what he is looking for - he kills them by breaking every bone in their body. But then BoneMan is released on a technicality and resumes the search for a new daughter - and he picks Bethany. What follows is Ryan's search to rescue his daughter and become the father he wants to be. But the authorities believe that Ryan himself is the killer.

On one level this is simply a story of a father fighting for his daughter's love and life. And on that level, it's a heck of a good tale, keeping me turning pages late into the night. It's a well written, suspenseful thriller, with a great twist at the end.

But in a bigger sense, BoneMan is a battle between good and evil. It is also a story of needing to be wanted, needing the love of a parent. For even though the BoneMan is disturbing, despicable and horrendous in his actions, the impetus for his actions is the desire to be loved.

I think every reader will take away something different from this book - a gripping read or perhaps a bit more - a look at some deeper values, second chances and some interesting ethical questions.

Gotta tell you though, Noxzema will have different associations for me from here forward!

Read an excerpt from BoneMan's Daughters in this absolutely unique format!

Or you can listen to Ted Dekker talk about BoneMan's Daughters in this video.

I agree, there's more to take from this book than just a thriller but I find it's that way with Dekker's books.

Great review! Ya know - I use Noxzema every day, and have for a long time, and even after finishing BoneMan's Daughters, it didn't occur to me to be weirded out by it - until now! lol I just think it was gross that he didn't wash it off.

This is next in my TBR pile and I'm really looking forward to it.

Another great review of this book!! Thanks for sharing your thoughts. Hope to get around to reading this sometime in the near future.

WHY won't this book come from the library?? Man, I really can't wait to read it!

Now I'm gonig to have to read the book, if only to find out what you mean with the Noxzema comment.

Wasn't that just "ick" with the Noxzema! Gives me the willies just thinking about having it everywhere!

I'm intrigued and curious about this one. Not 100% sure if I'm going to pick it up but I'm considering it.

Ive just started this one..and can't wait to get to the good parts!

I already had my eye on this one, but that Noxzema comment has made me really curious! I've read a few Dekker books in the past and really enjoyed them. This one sounds interesting as well.