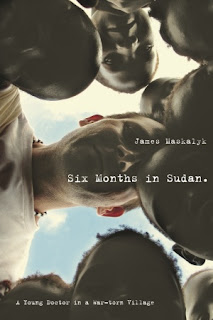 ~Subtitled: A Young Doctor in a War-torn Village~

Dr. James Maskalyk was an young emergency room physician in Toronto, Canada and no stranger to medical missions when he decided to join Médicins Sans Frontieres (Doctors Without Borders).

" I wanted to see who I was when everything was taken away, when all the insulation between the world and me was removed."

His six month assignment was to Sudan. Most of us think of Darfur when we hear Sudan. Maskalyk went to Abyei, a small town on the border between Southern and Northern Sudan. At the time he was there, the town was 'neutral', but surrounded by military from both sides. This book was born from a blog that Maskalyk started while in Sudan to communicate with family and friends. Upon his return to Canada, he found it difficult to assimilate back into his former life , to not look back at Sudan.

"I went to Sudan, and am writing about it again, because I believe that which separates action from inaction is the same thing that separates my friends from Sudan. It is not indifference. It is distance. May it all fall away."

Dr. Maskalyk has done a fantastic job in trying to minimize the distance and bring Sudan closer. I literally could not put this book down. It's one thing to read newspaper accounts of the tragedies happening halfway around the world, but this book put an intensely personal face on it. We are privy to Maskalyk's enthusiasm and hopes for making a immediate difference when he arrives. We are able to read of the sorrow, despair and toll the situation takes on him personally, as well as the cost of war on the people of Sudan. With our health care system in Canada, it is difficult to read of the many children dying from malnutrition and measles. He deals with gunshot wounds, rape and gun toting soldiers invading the hospital. We meet the many other caring individuals from other countries on MSF missions as well as Sudanese individuals trying to make a difference in their country.

This book is soul baring in it's honesty and stark in reporting the reality of a humanitarian effort in a third world country. I was alternately saddened that this is life's reality for so many and thankful that there are people like Dr. James Maskalyk in the world. I encourge you to check out photos of his time in Abeyi as well as the Six Months in Sudan website.

"Some of the work in repairing the world is grim: much of it is not. Hope not only meets despair in equal measure, it drowns it."

Newly released from Random House Canada, this is on my recommended 'must read' list. A definite 5/5.

Listen to Dr. James Maskalyk talk about Six Months in Sudan in this video.

I love books like this even though they do make me sad. I think it's so important to stay informed, though. Great review.

It sounds like a tough book to read, but worth it.

Sounds like a powerful book. A friend of mine just came back from Sudan, she went with one of the "lost boys" who survived a village ambush and emigrated to the U.S. Her church took him and some of the other boys in. They were just there for a few weeks to deliver medical supplies. I told them if they wrote up something about the trip I'd post it on my blog. Thanks for bringing this book to my attention, and I'll mention it to them, too.