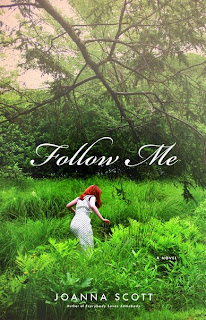 Covers are very often the first thing that catches my eye. The cover of Follow Me by Joanna Scott is incredibly vivid and lush, promising a rich read. And it didn't disappoint! Thanks to Miriam from the Hachette Book Group for this latest Early Bird Tour selection. Another great pick!

The opening chapter is tantalizing. An unnamed granddaughter promises to never repeat the story her dying grandmother, Sally Werner, tells her. Her grandmother "confided in me because she wanted me to understand, as she put it, how one thing led to another." This book and the story contained within is the breaking of that promise and a granddaughter's search for answers.

Sally Werner's story begins in 1947 when she is 16 and makes a decision to leave her newborn child on her parent's kitchen table and run away. She finds herself at the beginning of the Tuskee River, burbling up out of the hillside. Sitting by the river, trying to decide what to do next, she thinks she catches a glimpse of a funny little creature with yellow spots watching her. There is a legend - of the Tuskawali - believed to be "sacred incarnations of fate, begot in the underworld for the sole purpose of multiplying possibility in the world. Their goodwill could be cultivated simply by leaving them alone." Sally decides to follow the path of the river and see what comes next. Along the Tuskee, Sally finds kindness, happiness, sadness and cruelty. But she is optimistic, making the best of what befalls her. But it always seems that just when things are settled, fate steps in and changes the flow of her life.

The telling of Sally's story is alternated with her granddaughter's view on Sally's life and legacy.

"I was more than a mistake to my grandmother , I was the consequence of a long series of bad decisions traceable back years before my mother and father fell in love, back to the time before mother had been born, when my grandmother was a young woman fumbling along, following the river north."

At this point in the story I had a good idea where it was going. But this didn't detract me from rapidly turning pages. Sally's life and choices are fascinating. She is a strongly written character, evoking many emotions in the reader. My opinion of her changed many times. I found myself feeling sorry for her, angry with her, proud of her and changing my viewpoint many times. She is resilient, going against the social mores of the 40's and 50's.

Throughout it all, the Tuskee River is a constant. The Tuskawali make appearances, but you have to read carefully to catch the references.

Towards the end, as Sally's granddaughter begins to find anwers, the same story is told by two characters. I found this part a little slow going - I was in a hurry to see the outcome. And although I would have liked to have the final scene all spelled out, I'm happy that Scott left it to us to use our imagination.

I really enjoyed this book. Sally Werner's life, her jouney, her indomitable spirit and the undercurrent of the Tuskawali made this a bewitching read.

I agree with you that Sally is a strongly written character, and that's why she ticked me off. I didn't like this book nearly as well as you do. My review is here:
http://necromancyneverpays.blogspot.com/2009/02/i-know-way.html

I was frustrated with Sally at first, but came to really appreciate her. Great review.

Great review - I agree that the book dragged a bit at the end...but I still liked it.

I thought this book was ok, but not great. It felt really drawn out to me but I do agree that Sally was a good character. You wrote a great review. I'm glad this was a good read for you.

Lush is such a good word to describe this book!

Glad to hear you enjoyed this book. It was a tough read for me. I thought the characters and the story itself were interesting, but it moved too lowly for my tastes.

I'm happy you enjoyed the book...I had a rough time with this one.

Gosh, I loved this book! :D

I agree about the book being slow I find that a LOT of people felt that way. Either way I loved it. :)

OOOOH I just love a book where the character keeps me emotionally involved. Great review!

Wonderful review! I think I would enjoy this one.

I agree, I love this cover but it just sounds like the story would be too sad for me.

I really want to read this!