Fifty is Not a Four-Letter Word - Linda Kelsey 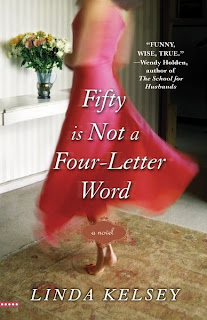 Fifty is Not a Four-Letter Word is Linda Kelsey's debut novel. Although I originally thought this would be a chick lit type of read as the ARC I reviewed had a sexy black slip and a 'fun' font for the title. I was glad to see the cover changed on the final book, as it was not as light a book as I first thought. It was more of a retrospection of the unsatisfying/damaged relationships in the main character's life as well as an introspective look at herself.

Hope Lyndhurst-Steele is getting ready to celebrate her fiftieth birthday on New Year's Eve. She is having great angst over this 'auspicious' occasion. Topping it off, she is fired from her job as a glossy women's magazine editor, her mother announces she is dying, her son is having an affair with an older woman and her husband decides to leave her.

The rest of the book covers the next year in Hope's life as she attempts to make sense of all that has happened and how she will move forward.

Kelsey was the editor in chief of the UK Cosmopolitan magazine. (Note that her protagonist has the same job) For me her book reads somewhat like a series of vignettes that could have been published in just such a glossy magazine. There are lots of extraneous descriptions of food, furniture, art and designer names thrown around. Some would set the tone, too much feels like filler. It is written in a first person narrative, which normally would allow us to connect with the lead character. Unfortunately I never connected with Hope. I found her to be a shallow, selfish, vapid woman who makes some choices that I find questionable. Yes she turns things around in the second half of the book to a certain degree, but it was too little, too late for me. Her friends Maddy, Vanessa and son Olly were more appealing to me. Kudos to Kelsey for portraying such a positive gay relationship in Stanko and Mike.

The ending was left undefined and left me feeling unsatisfied. I think I'm in the minority here as a lot of my fellow bloggers really enjoyed this book. For a different viewpoint check out Kathy's review, Stacie's review and Elizabeth's review.

Sorry this one left you disappointed - thanks for the link love.

I like the cover you posted. Doesn't sound like my type of book, though. I know it's hard for me when I can't connect with the main character.

Thanks for sharing your review and for linking to mine.

I absolutely agree with you about not being able to sympathize with this protagonist! I reviewed this book:
http://necromancyneverpays.blogspot.com/2009/03/post-feminism-vs-phoning-it-in-feminism.html

I just got this book from the meet up. Not in a real rush to read it. I really like the cover of it.