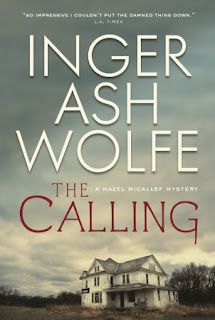 You know, when The Calling first came out in hardcover last year, I heard nothing but rave reviews. It was voted one of the best mystery books of 2008 by Publisher's Weekly. Well, the paperback releases today from McClelland and Stewart and I'm kicking myself that I didn't grab a copy sooner. What a fantastic read!

The book opens with Delia, a terminally ill woman, letting the mysterious, cadaverous Simon into her home. She has been communicating with him for a while now. As she willingly takes the herbal tea he offers and falls asleep, he chooses between the gun, hammer and knife he has also brought along, finally deciding on the knife. Delia lives in Port Dundas.

The wonderfully different protagonist is Inspector Hazel Micallef of the Port Dundas, Ontario Police Department. Hazel is 61, newly divorced, her elderly mother lives with her, she suffers from excruciating back pain and medicates herself with whiskey every now and then. The Port Dundas department is woefully underfunded and understaffed. The Ontario Police Services is hoping to close them down and amalgamate with a larger force.

With the discovery of Delia's body, Hazel launches her investigation. When she discovers that Delia is not the first victim and that the killer may be operating Canada wide, she chooses not to involve the Mounties - a decision that may have serious repercussions. Her rogue methods may backfire.

Hazel herself is a flawed, realistic character. I also loved the supporting police team - the enigmatic Wingate, crazy Sevigny as well as Hazel's feisty mother Emily. (Her response to someone who offers help to the 87 yr old - "Piss off, I'm not crippled.") The killer Simon is explored in detail as well. Is it love or madness that drives him on his missions of mercy?

I wanted to stop and make notes as I read, but literally didn't take the time. I couldn't put the book down - a pager turner that I took everywhere for two days!

Now who is Inger Ash Wolfe? There has been great speculation about the true identity of this pseudonymous author. Me - I don't care, I just really want another Micallef mystery!

Want a chance to read this one yourself? Thanks to McLelland and Stewart I have three copies to giveaway. Please take note that this giveaway is open to CANADA ONLY. Comment to be entered, and extra entry for becoming or being a follower (let me know) and a third for tweeting/blogging about this post/giveaway. Giveaway ends May 26th at 6pm EST. Good luck!

OK, you are making me want to move to Canada! Sounds like a very interesting book, but one that I would not want for calming, night-time reading.

Ooh, I'm glad I do live in Canada! Please count me in, this sounds like an intriguing mystery.

I'm a follower as well!

I'm in Victoria BC and I would love to read this book!

greeeneyedwhwomhttp://tinyurl.com/cgabkm CANADA only, win a copy of The Calling......

Sounds great but I don't live in Canada.
It's definitely in my wish list now!!!

I love a good mystery. This one sounds interesting. Please enter me. I follow your blog via Blogger's follow function.

Thanks for this giveaway. I sounds amazing and wonderful.

Well your second paragraph had me raising my eyebrows lol! Wow! Well, I'm not in Canada so I can't enter *pouts* but I'll have to see if the library has this one.

Darn, I'm from America! Just posted on Win A Book.

Sounds great, I would love to read it. Thanks!

Yay I'm in Canada!! Please count me in.

This is so cool! I just heard about Inger Ash Wolfe the other day and added her? to my list of authors to try and here you are having a giveaway. Please enter me! I am also a follower and I twittered (lilelizajane) about it.

Enter me, please and thank you!

I'm not eligible for the giveaway, but I wanted to say your review made me want to read this book.

Please enter me. That sounds great.

tee hee, I'd like to read more about Emily!

Blogged about this giveaway here.

I am a proud canadian. Please enter me in the giveaway

I love mystery books - count me in!

I blogged about this here:

Sounds good! Finally a giveaway just for Canadians! and a good one at that!

Hi Luanne. Sounds like a great book. Count me in the draw!

I would love to be entered please. Great giveaway. Thank you.

Sounds interesting! I would like to read this book.