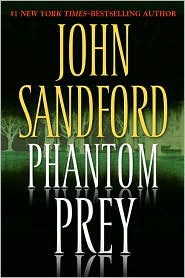 John Sandford brings us the 19th book in the "Prey" series, Phantom Prey, featuring Lucas Davenport.
Davenport works for the Minnesota Bureau of Criminal Apprehension. He is a bit of a rogue cop, not quite fitting in, with a team of like minded detectives. He's rumpled, aggressive, loyal and determined.
Davenport is married to Weather, a surgeon. When she asks him as a favour to talk to her friend Alyssa about her daughter Frances' disappearance and possible murder, Lucas reluctantly agrees. The local cops haven't been able to move the case forward and he really doesn't see how he can help.
Frances was dabbling in the Goth world and her mother believes this group holds the key to her missing daughter. Lucas starts making inquiries and someone starts targeting Goths. A mysterious woman - a Fairy Goth- may have answers, but can't be found.

Nothing is as it seems and the closer Lucas thinks he's getting to an answer, the less things make sense.
Del and Lucas are also staking out Siggy - a drug lord they've been trying to capture for awhile. This is a fun second story line.
Davenport's irreverence and that of his team is entertaining. Sandford never disappoints. Phantom Prey is another solid read with a great character.
Readers of Jonathan Kellerman, Jeffery Deaver and Michael Connelly will enjoy this series.
Posted by Luanne at 9:36 AM