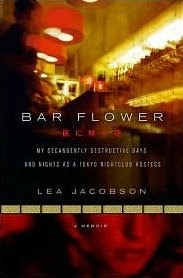 Lea Jacobson's memoir is subtitled " My Decadently Destructive Days and Nights as a Tokyo Nightclub Hostess."

I'm a sucker for a good memoir and this one sounded really interesting.
Jacobson is an American fascinated with Japanese culture and language. Her studies have made her quite proficient in the language, so she accepts a teaching position in Japan. Her visa is good for two years.
Learning the culture through a book and experiencing it firsthand are two different things though. Jacobson has difficulty accepting the rigid standards and structures of Japanese society. She is fired from her teaching position and begins to drift.
She ends up hostessing in a Tokyo nightclub. I think like most people I had some preconceived notions as to what hostessing entailed. Jacobson gives a detailed account of this profession. In fact her memoir reads as a diary, detailing friends, encounters and thoughts. We are offered a fascinating glimpse into Japan from someone living fully immersed in the culture.
This immersion begins to take it's toll on Jacobson. She descends into alcoholism and self harm in many forms. She realizes she needs out and returns to the US, but is just as disillusioned there, and returns to Japan.
Jacobson ends her book with the Japanese saying" Fall over seven times, wake up eight." She manages to pull it together. I found myself wanting a bit more concrete detail from the epilogue, but found her blog which ties up things a bit more.

Welcome Home! Sounds like a pretty eventful trip. The pictures are wild - I have been watching it on the news and hoping you were not going to a flooded area.
Glad to see you back in the book blogging!