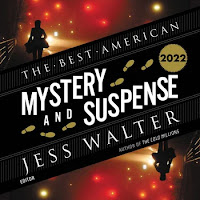 I've always meant to pick up one of the annual mystery and suspense year end compilations. This year I finally did! (And now I know what I've been missing.) This is actually the 26th entry in the Best American Mystery and Suspense 2022 yearly collections.
Jess Walter is the guest editor, who, with series editor Steph Cha were charged with choosing 'the twenty short stories that represent the best examples of the form published the previous year.' The process to try and narrow the field down to just twenty entries is detailed in the editor notes. I wouldn't want to be the one making those decisions.
There were entries from authors than I'm familiar with, such as Dennis Lehane and S.A. Paris. I know their style and knew I would enjoy their entries. (I did) There were many 'new to me' authors and I was excited to experience new voices. This format lends itself to new discoveries. Where was such a wide variety of styles, locales, length, protagonists and more!
I'm always fascinated by this style of story telling. How to fit in characters, a protagonist, a beginning and an end into a limited time or space. It's nice to pick the story you have time for at lunch - and escape into a book for a short period of time, but with a sense of satisfaction.
I chose to listen to this book. A number of narrators were used for this compilation - Desean Terry, Lindsey Dorcus, Max Meyers, Frankie Corzo, Christopher Salazar and Chanté McCormick, Each and every one was excellent. The readers change their tone, cadence, accent, etc. to suit the stories being told. The speed of speaking was good and all spoke clearly.
Hear for yourself - listen to an excerpt of  The Best American Mystery and Suspense.
Posted by Luanne at 8:00 AM

A lot of very different styles Harvee, which kept me interested in the next...and the next...

I'm not familiar with this as a concept, but I love it! What a great way to sample authors!

It really is Ethan. They also do sci-fi, nature and a few other collections I believe.

I'm not much of a short story reader, but these type of books are fun and they certainly add authors to your TBR list!

You're right Kay - a great way to find new authors. I must admit that mystery/suspense titles are the only short stories that I enjoy.