A Ghost of Caribou - Alice Henderson 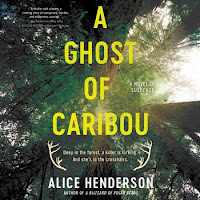 A Ghost of Caribou is the latest entry in Alice Handerson's  Alex Carter series.
Alex is an wildlife biologist who travels Canada and the US tracking species that are in danger. And, it seems like wherever she goes, Alex attracts danger as well.
This time around, she's looking for confirmation that the reported sighting of a mountain caribou is real, as they are extinct in the contiguous United States. I've quite enjoyed learning about each of the featured animals in this series. Henderson's facts are real and she is a dedicated wildlife researcher who walks the talk.
I really like Alex as a lead character. She's strong, resilient, curious, intelligent, adventurous, and courageous. She doesn't back down from anything. But she's smart about it. Supporting players are her dad and her best friend Zoe. Because of her job, contact is usually over the phone. Their lives are interesting as well and there's usually a mystery one of their lives.
The setting this time is in the Selkirk mountains of Washington state. Henderson does a fantastic job with her setting details. There's a lot going on in this forested area. Missing women, logging disputes, mysterious tunnels - and mysterious inhabitants. Alex has landed right in the middle of things.
The plot is very good. There are a few grains of salt needed with some of the happenings, but just go with it. There's lot of action and many a dangerous situation, characters to like, and many to dislike (strongly) And the end pages brought a surprise. Those who have read the first two books will be surprised as I was.
I chose to listen to A Ghost of Caribou. The same narrator, Eva Kaminsky, has read the previous two books as well. I really appreciate the continuity. Her voice absolutely matches the characters. Kaminsky captures the tone of A Ghost of Caribou. Her voice easily portrays the danger, the action and emotions of the book. Her voice is clear, easy to understand and pleasant on the ears. The speed of the narration is just right. I often find myself more drawn into a book when listened to, rather than a print copy. And that's the case with A Ghost of Caribou. Hear for yourself - listen to a sample of A Ghost of Caribou.
Posted by Luanne at 8:00 AM

I really enjoyed A Blizzard of Polar Bears. I'll need to add this next book to my listening list!

I'm glad to hear you've enjoyed the series as well Ethan. It is a good listen. Enjoy!