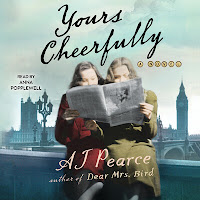 I absolutely adored AJ Pearce's debut novel, Dear Mrs. Bird. I was thrilled to find she had written a second book featuring the indomitable Emmy Lake. Yours Cheerfully is newly released - and it's just as wonderful as the first book!
1941 Britain. Emmeline Lake works for Women's Friend magazine. She's now in charge of the advice column, Yours Cheerfully. Her role expands even further when women's magazines are asked to help recruit female workers to the war effort, such as working in munitions factories.
What has endeared this series to me? Pearce has created an absolutely delightful character in Emmy. She's plucky, (don't you love that descriptor?) irrepressible and so darn likeable. The supporting cast includes best friend Bunty, the magazine staff, the women in the factories and more and are just as well drawn. I easily became invested in their stories.
Pearce has captured the stalwart attitude of the Brits in the war years, the 'can do' attitude, the camaraderie of the women and their determination to help the war effort. Her plotting is based on historical happening. Her detailed descriptions paint vivid mental images of wartime Britain. And I quite liked the features, stories and letters from the magazine.
Pearce also weaves romance into her books, both found and lost. Again, all capturing the time period. The social mores, the joy in simple things, the making do and more. And more is what I want! Pearce is working on the third book and I can't wait to see what's next for Emmy and et al. Absolutely recommended!
I chose to listen to Yours Cheerfully. The narrator was Anna Popplewell and she was the perfect choice. Her voice matched the mental image I had created for Emmy. Popplewell also voiced the first book and the continuity is appreciated. She has a lovely rich British accent that is very pleasant to listen to. She enunciates well and speaks at a good speed. Her voice has movement, rising and falling as she narrates She easily captures the emotions of the characters, the tone of situations and the action of the book with her voice. An excellent performance. Hear for yourself - listen to an excerpt of Yours Cheerfully.
Posted by Luanne at 9:00 AM

The title is enough to draw me in. Specially good these days. We in semi lockdown.

I liked Dear Mrs. Bird too and have been looking forward to reading this.

Mystica you'll really like it! Have you read Dear Mrs. Bird yet? Sorry to hear you're on lockdown - thank goodness for books eh?

Holdenj - just as good as the first one! Enjoy!