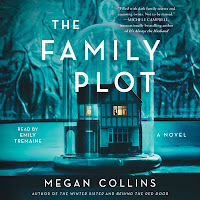 The Family Plot is Megan Collins' third novel.
Dahlia Lighthouse and her three siblings were raised in a secluded house on an island. They were also homeschooled by their parents - and murder was a large part of the curriculum. Not committing it, but learning about, researching and reenacting high profile cases and holding ceremonies to honor the dead. The four eventually all leave their island home, but one goes missing or chooses to distance themselves. On returning home for a funeral....
I'll leave you to discover what has happened - and who might be responsible.
I have to admit that I thought the whole schooling in murder idea was a bit far fetched. But not improbable. I liked the setting - an old mansion on an isolated island gave the setting a lovely Gothic feel. Collins adds in some reclusive neighbors, suspicious townsfolk and a sketchy cop to round out the cast. And....the Blackburn Island serial killer. Yup, there are a number of women who have been murdered on the island over the years.
The story is told from Dahlia's point of view. But can we trust her memories or her perspective on the current events? We are given a lot of information early on and I was quite happily turning pages, but by mid book, I felt like the momentum had slowed. Delilah's recounting seemed repetitive, with the same emotions voiced over and over again. A lot of the situations required more than a few grains of salt.
Collins gives us a number of options for the final whodunit, with each suspect being quite plausible. I placed money on one suspect in the middle of the narrative and was proven right in the end.
I chose to listen to The Family Plot. The reader was Emily Tremaine. Her voice absolutely matched the mental image I had of Dahlia. She has a clear, strong speaking voice, easy to understand. Her pace of narrating is just right. Tremaine is a very expressive reader and captures the tone of Collin's work very well. A really good performance. Hear for yourself - listen to an excerpt of The Family Plot.
The Family Plot was definitely a different read and I enjoyed it, but not as much as I was hoping to.
Posted by Luanne at 9:00 AM