Thanks to Andrew Altschul, author of the newly released novel, The Gringa, for stopping by today to answer a few questions. And.....I also have a copy of the Gringa to giveaway!

Q and A with Andrew Altschul, author of The Gringa

The Gringa is inspired by the real-life story of Lori Berenson, an American who was sentenced to 20 years in prison for terrorist activities in Peru in the 1990s. What about Berenson’s story inspired you to base this historical novel on it?

I lived in Peru for a couple of years in the late 1990s, soon after Berenson’s arrest and trial. Even though she was in a military prison, she was still in the news from time to time, and every time her name came up people went crazy – she was the most hated person in Peru, the foreigner who’d come to try and restart a war (or so the government alleged). I was intrigued by this, and also by the question of what had brought her there. She and I have certain things in common – we’re the same age, we both grew up in secular Jewish families in the New York area, went to great schools, etc. etc. I like to think of myself as a liberal or even a leftist, but I had never gone “all in” the way Berenson had, or really risked much of anything in the name of my political beliefs. So there was something about her story that was both chastening and frightening to me, and part of writing the novel was to try and understand why one of our lives went in one direction, and the other’s went in such a different direction.

The point of view in the novel is that of an American journalist living in Peru. How closely is that perspective based on your own life experiences?

Well, he’s sort of a “reluctant” journalist – he’s a failed novelist and a “refugee from George W. Bush’s” America, who gets strong-armed into writing the story of this paroled terrorist. He’s left the U.S. for a lot of reasons, and many of them are somewhat similar to mine. And his life in Peru, too, isn’t so different from mine – he thinks only of himself and his enjoyment, rather than trying to do anything to contribute to this country he claims to love. In that sense, he’s an exaggerated version of me, and I wanted to use Andres to both investigate this American propensity for self-centeredness and self-misunderstanding and to maybe think through what it might take to get Americans to think in more complex and responsible ways about the lives of people in the rest of the world.

What did you learn from researching and writing the novel about the ways in which people get involved with radical groups and how they transition from activist to radical?

I learned that it’s often, as Hemingway supposedly said about bankruptcy, “little by little and then all at once.” That is, not many people join radical groups in the hopes of killing people or blowing up buildings or hijacking planes – they join because they see these groups as dedicated to change and potentially more effective than traditional political avenues. The groups themselves usually start as “legitimate” political groups, and slowly evolve or factionalize as members grow dissatisfied with a lack of results. (Weather Underground split off from SDS precisely because they felt SDS wasn’t ready to do what it took to be effective). So someone who joins to take part in nonviolent protest, seeing that such protest isn’t working – and in fact is often provoking violent responses from the police or government – might slowly grow willing to consider… other tactics. Or they might not quite grasp how the group itself is changing around them, until suddenly the “actions” start to cross the line, but because of their dedication or solidarity they feel they have to stand with their comrades. I think the psychology varies.

Did you feel a burden to be 100% historically accurate in your depictions of the war and conflict in Peru?

In my depictions of the war and the history of Peru: yes. This is serious, life-and-death stuff, and a novelist has no business manipulating history to make a “better story.” That is, my protagonist and her colleagues in the group I’ve called the Cuarta Filosofía have some similarity to real-life persons, but the specific things they did and said are purely fiction. I did not set out to write about the “real story” of Lori Berenson, or the MRTA. But I placed them in a context which I took tremendous pains to keep accurate to the realities of the war, and to the reactions of the government and the Peruvian people. I had no right to do otherwise. At the same time, one of the most interesting things about writing the book was discovering that there is no “authoritative history” of the conflict – and in fact many people I talked to and many sources I read told very different stories, disagreeing even about “objective” facts like dates, statistics, etc. This was challenging for me, and really slowed down the writing – until one day I was talking to a Peruvian friend who’d been a student activist during this period, and he said, “But Andrew, that’s always how it is. No two Peruvians agree on what happened or why.” Once I understood this, I knew that my novel had to take precisely this approach, to look at the history of the war as something unstable, ever-changing, subject to manipulation and bias. It makes the novel more challenging, I think, but also, I hope, makes it “truer” to the experience of anyone who lived through the conflict.

How long did it take you to write this book? What was your writing and research process like?

It took eight years. It was the hardest thing I’ve ever written – largely because of all these ethical questions: How do you write about a war? How do you write responsibly about another culture, another history, particularly a history that claimed so many lives? I worked on it nonstop, and made four or five extended trips back to Peru to talk to people and get to know Lima better than I had when I lived in Cuzco. But there were many times when I thought I wouldn’t be able to finish it, that I just had no business, as a privileged white American, trying to take on this material. “Who am I to write this?” I kept asking myself. “Who am I?” What finally turned it for me was a conversation I had with a journalist friend, who told me, “You’re Lori Berenson.” What she meant was that I, too, was an outsider, an interloper, a gringo, and so there was a direct analogy between my relationship to the material and Berenson’s relationship to Peru and its history. It was this realization – that I had to write it from the perspective of someone who doesn’t really know how to write it, and maybe has no business writing it, and that I had to cop to that in the form of the novel itself – that enabled me to finally finish writing it.

What has the experience been like of publishing your book in the midst of a global pandemic?

It’s been great! Ha ha. It’s been hell. I had five events set up during the week after publication, and ten more throughout March and April – but as I travelled from city to city I would get notified almost as soon as I arrived that the event was cancelled: Worcester, MA; Providence, RI; New York City, Denver, San Francisco… one by one, they all went down. I spent nearly a year putting this tour together and I’m crushed. And since then, I’ve spent all day every day trying to shore up the book through online events, social media posts, etc. It’s far more exhausting than the book tour would have been, and I feel like it’s just getting started. Still, there have been some nice things, one of which is forming a kind of unexpected fellowship with other authors in the same boat, sharing tips and experiences with them, recommending one another when we hear about possible events, etc. I’ve always been a big believer in the literary community, and the outpouring of support I’ve heard – for authors, for bookstores, for small publishers – has been a real silver lining through this difficult time.

Thanks so much for stopping by Andrew. Read an excerpt of The Gringa. 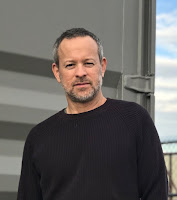 "Andrew Altschul is the author of the novels Lady Lazarus (2008) and Deus Ex Machina (2011). His work has appeared in Esquire, McSweeney's, The Wall Street Journal, Ploughshares, Fence, One Story, and other publications, and in anthologies including Best New American Voices, Best American Nonrequired Reading, and O. Henry Prize Stories. A former Wallace Stegner Fellow and Jones Lecturer at Stanford University, he has received fellowships from the Bread Loaf and Sewanee Writers Conferences, the Ucross Foundation, the Fundación Valparaíso, and the Rockefeller Foundation Bellagio Center. He was the founding books editor at The Rumpus and is a Contributing Editor at Zyzzyva. The former director of the Center for Literary Arts at San Jose State University, he now directs the Creative Writing program at Colorado State University. He lives in Fort Collins, CO." You can connect with Andrew on his website, like him on Facebook and follow him on Twitter as well as on Instagram.

And if you'd like to read The Gringa, enter for a chance to win a copy using the Rafflecopter form below. Open to US only, no PO boxes please. Ends April 25/20.

I had read about this in the news. The book would be very interesting. Thanks for this feature and giveaway.

Wow, eight years to write. What an interesting interview, look forward to reading it.