Strike Me Down - Mindy Mejia 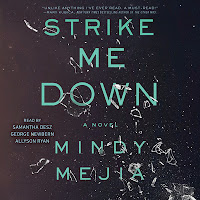 Did I mention that audiobooks are my go-to right now? My latest listen is Strike Me Down by Mindy Mejia.

I was familiar with Mejia's writing as I'd read her two previous books. But, I was surprised by the plot of Strike Me Down - it's unusual and different, so I didn't feel like it was one I'd already heard.

Forensic accountant Nora Trier is hired to find a missing twenty million dollars for Strike - an athletic group with deep pockets and legions of fans. Strike is owned by a husband and wife - Logan is a kickboxing legend and Gregg is the marketing maven. That's the bones of the plot, but there's much more to it than facts. Relationships play a big part in this mystery/suspense - for all characters but focusing on Nora.

The story is told in alternating chapters from Gregg and Nora. We get to know these two fairly well because of this technique. Logan is a big part of the story, but we don't really get inside her head. Instead we see the public Logan. I felt like I should connect with Nora, but never quite did. Instead I was observing her, rather that commiserating with her.

The listener is part of the investigation with information from the two sources. The back and forth keeps the reader guessing until the end. The final whodunit was telegraphed before the end and was unexpected.

As I mentioned, I chose to listen to Strike Me Down. Multiple narrators were used to present this novel. I really like cast ensembles. There's no guessing which character is speaking and it adds to a more realistic feeling. Samantha Desz, George Newbern and Allyson Ryan were the narrators. I must admit George Newbern is a perennial favorite of mine. He has a very versatile voice that easily moves from earnest to malevolent. And I don't know how to explain it, but he has a 'tone' to his voice that is really distinctive. I'm not sure which reader did each of the female roles, but they both suited the character they were portraying. The voice for Nora was controlled and well modulated, absolutely suiting the character. The voice for Logan, was big, bold and brash - again a perfect fit.

Strike Me Down was a comfortable, easy listen. Hear for yourself - listen to an audio excerpt of Strike Me Down.
Posted by Luanne at 7:00 AM

I've been doing better with audio here lately, too. This sounds pretty good.

This one sounds good and I like ensemble casts or narrators too. Yes, audiobooks, what would we do without them - especially right now? LOL

I had a really good time with this one too!

Hope you enjoy it as Bermudaonion and Kay! I know you did as well Ethan!