To Have and To Hoax - Martha Waters 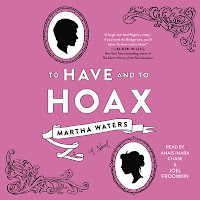 How would I describe Martha Waters' new novel, To Have and to Hoax? A Regency rom-com!

Lady Violet Grey and Lord James Audley fell madly in love five years ago. That first year was magical. The next four? Not so much. Lady Violet is determined to have their polite stalemate ended and devises a plan. She will pretend to be ill and certainly that will bring them back together. Right? Uh huh. What is that phrase about the best laid plans?

To Have and to Hoax follows Lady Violet and Lord James from one hair brained scheme to another. It's a fun journey full of missteps, miscommunications - and the undeniable fact that they are still in love. And yes, some of the plot stretches credulity, but that's the whole idea - just go with it.

It was easy to like both lead characters and root for their romance to be rekindled. The supporting cast was just as likeable, with a few quirky additions. But, what I really enjoyed was the dialogue. Waters has absolutely captured the verbal jousting of polite society in the Regency period. The sly barbs that are still perfectly correct, the double entendres that can't be acknowledged, the 'proper' ways of manners and society and more.

I chose to listen to To Have and To Hoax. Listening to the audio version allowed me to hear and experience the cleverness of those conversations much more than so than I would have by reading a print copy. The narrators were two 'new to me' readers - Anais Inara Chase and Joel Froomkin. I thought they both did a great job. And I was glad to have two readers instead of one playing both parts. Chase's voice was light and quick and perfectly suited the mental image I had created for Lady Violet. Her intonation is clear and easy to understand. She captures the tone and tenor of the action and situations easily with her voice. Froomkin is an award winning voice actor. I can see (hear) why! He easily captures and portrays the character of Lord James with his aristocratic tone and measured speed of speaking. But he too captures the emotion and action of the book, giving his interpretation lots of movement. The two play off each other very well and are quite believable as a couple. Hear for yourself - listen to an audio excerpt of To Have and To Hoax.

To Have and To Hoax was a light-hearted, fun read and a nice distraction from the real world.
Posted by Luanne at 7:00 AM

This one sounds absolutely delightful!

It was nice escapist listening Ethan!