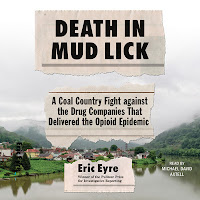 I'm always appreciative of a good fictional tale. But, it's hard to top a real life narrative....

Death in Mud Lick: A Coal Country Fight Against the Drug Companies That Delivered the Opioid Epidemic by Eric Eyre is one of those real life stories.....

From Simon and Schuster:

"From a Pulitzer Prize-winning reporter from the smallest newspaper ever to win the prize in the investigative reporting category, an urgent, riveting, and heartbreaking investigation into the corporate greed that pumped millions of pain pills into small Appalachian towns, decimating communities."

I'd read new reports and watched some investigative reports on this, but wanted to know more. How's this fact to get you started? " The story of Death in Mud Lick starts with a pharmacy in Kermit, West Virginia, that distributed 12 million opioid pain pills in three years to a town with a population of 382 people."

A local resident who lost her brother to drugs is determined to find how and why he died. Eyre works as a reporter for a local paper and joins the crusade. And what he found had my jaw dropping. The sheer audacity and greed of big pharma, the deceit, the doctors on board with this and the stonewalling of each and every avenue Eyre tries to take to find answers and accountability.

The listener is alongside Eyre as he meets obstacles and roadblocks at every turn - and knocks them down or finds another way around. I was fascinated by how he found the evidence. His tenacity is inspiring. (Even more so as he was diagnosed with Parkinson's Disease during all of this.) But Death in Mud Lick is not just facts and figures. It's also about people - the lives touched, changed and lost from opioids. These are heartbreaking stories that underline the insidiousness of addiction.

I chose to listen to Death in Mud Lick. The reader was Michael David Axtell. Axtell's voice easily suited the mental image I had created for Eyre. His speaking is clear, concise, well enunciated and easy to understand. His voice has movement, capturing the tone and emotion of the book. This is hard to explain - but his voice just says 'investigative reporter.' Dogged and determined.

This is an amazing David and Goliath tale that should never have happened in the first place. Death in Mud Lick was a fantastic listen - absolutely recommended. Hear for yourself - listen to an audio excerpt of Death in Mud Lick.
Posted by Luanne at 7:00 AM

Oh great! I hope you enjoy it Bermudaonion.

Thanks for posting a review of the audiobook. I thought the narrator was exceptional too, though some local listeners noted that he pronounces Appalachia the northern way, Appa-LAY-cha. Of course, here in WV, we sat App-UH-LAH-cha.

I've been reading more and more non-fiction lately. This one has been added to my list!

You're very welcome Eric! I have heard both pronunciations and see your point. Makes you wonder who listens/edits the final product.

I too am gravitating towards non fiction lately Ethan, got some good ones just waiting...