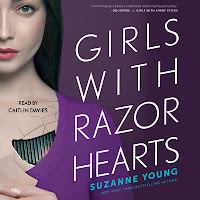 I listened to the first book in Suzanne Young's YA series 'Girls With Sharp Sticks last year (my review). I quite enjoyed it and happily settled in with the newly released second book, Girls With Razor Hearts.

Mena and some of her friends discovered the truth about the  experiments and violence at their school, Innovations Academy, in the first book. They escaped and are now on the hunt for the Corporation, determined to take it down and free the girls still at the Academy. (Now, I am deliberately leaving out a few details in order to prevent spoilers.) They head to another school, hoping to make contact with an investor's child that reportedly attends this institution.

I had to shut down my default pragmatic thinking. I could see flaws in their plan (and had suggestions on alternates!) But without that flawed scheme we wouldn't have the plotlines that lead to ever increasingly dangerous places and people on the way to the final aha! So, my advice? Just go with it. And take note that the words futuristic and dystopian are good descriptors of this series.

I liked the cast of characters I met in the first book. And Mena is a great lead. You'll have no problem knowing who to dislike and suspect - although there are some that I'm not sure about. Are they working with or against the girls? The friendships between the girls are well depicted. And a blossoming romance is well done and well paced.

Gentle readers, there are some 'darker' matter in Girls With Razor Hearts. Some of it may be triggers for certain readers and listeners. I will say that the phrase..'but he's such a nice guy' was powerfully used.

GWRH does explore a number of  themes - bullying, sexism, classism, abuse and more. Perhaps a few too many more as I started feeling overwhelmed with the issues, feeling like they were taking precedence over the plot.

I did choose to listen to Girls With Razor Hearts. I was so very glad to see that Caitlin Davies was also narrating this second book. She did a great job with the first book and continuity is important with series. Her voice has created mental images of all the players. She uses a well enunciated, almost clipped, naive voice for Mena that is just right for the character and plot. Davies provides many different voices for the other players (including males) that make it easy to differentiate who is speaking. Her voice is clear and easy to understand. She uses her voice well, interpreting and presenting anger, fear, action and more. Hear for yourself - listen to an audio excerpt of Girls With Razor Hearts.

While the girls found some answers in this second entry, there are still more questions and more 'baddies' to chase down. We'll see what book three brings!
Posted by Luanne at 7:00 AM

I find that these YA novels work really well as audiobooks!

They do Ethan. And I find myself listening to more and more!