A Conspiracy of Bones - Kathy Reichs 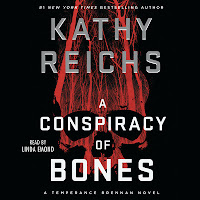 Kathy Reichs has just released A Conspiracy of Bones - the 19th entry in her long running Temperance Brennan series.

I was a few books behind but it was easy to catch up in the opening chapter. A quick recap of what's going on in Tempe's life had me up to speed - and ready to see what was next in store for this forensic anthropologist. A lot, as it turns out....

An unidentified corpse missing many parts - but has Tempe's phone number in his pocket, a new boss who despises Tempe (the feeling is mutual), missing children, conspiracists and their theories, the dark web and more. And on top of it all, she's been diagnosed with a brain aneurysm.

The book starts out strong and I was caught up from the opening pages. And it only gets better as it progresses. Honestly, there was no way to predict where the plot was going to go. I actually stopped listening at one point to go online and see if some of the plot devices actually happened. Frighteningly, the answer was yes - MKUltra is a fact. Each new piece of evidence and every revelation only intrigued me more. And just when I thought I had the ending figured out - there were three or four additional chapters that changed the outcome I had predicted. I really enjoy being surprised.

I've always liked Tempe as a character. She comes across as believable. Love interest Ryan makes an appearance as well - another long running character and relationship that adds another layer to the books. I also like Tempe's mom - her bawdy one liners make me laugh and I picked up some computer knowledge from her explanations. But the supporting player I really like is ex-homicide investigator Skinny Slidell. He's irreverent, loud and a bit obnoxious. But he's a dogged investigator and he and Tempe make a formidable team. He too has some great lines.

As I mentioned, I chose to listen to A Conspiracy of Bones. Having read physical copies of the previous books, I noticed a big difference. I really, really enjoyed the audio version! The reader was Linda Emond and she was fantastic. She has a very versatile voice. Her voice has movement, rising and falling as she narrates. I've never watched the television show Bones, so I didn't have a preconceived notion of what Tempe's voice should sound like. Emond's voice was perfect and will for me always be the voice of Tempe. (I hope she reads forthcoming books) The voice for Slidell was spot on as well - loud, with a down home accent that was just right. When they're talking, you could believe there are two people speaking. She did a good job with Ryan's French accent as well. I found by listening to this one, I took in more. I heard the humor in Reich's writing. Yes, there are lots of funny lines in such a 'deadly' book. Her voice is pleasant to listen to and easy to understand. And as I always say, I feel more drawn in to a tale when I listen. See for yourself - here's an audio excerpt for you.

PS - make sure you listen to the author's notes at the end!
Posted by Luanne at 7:00 AM

I loved this series when I first discovered it but grew tired of it. Maybe I should try audio next time.

Try the audio Bermudaonion - I was feeling the same way, but really liked the audio.

It's been a long time since I read one of the books in this series. And I did watch the TV adaptation from beginning to end. However, audiobooks are my mode of reading these last few days and I'll keep your thoughts in mind about this one. I think I might decide to just listen to this one and not worry about the ones I missed. Hope you remain well, Luanne. Take care!