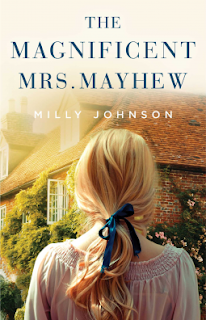 The Magnificent Mrs. Mayhew is a first read of Milly Johnson for me - but it won't be my last!

Sophie has been brought up to stifle her emotions and 'do her duty'. That duty doesn't include herself. Instead she is to support her husband, a politician who has a good shot of being Prime Minister. She has always done what is necessary to help his career. After all, he loves her - doesn't he?

Until....Doorstepgate.....the day that Trophy Sophie has had enough. Enough of her husband, their families and not enough of herself. She runs away to the only place she truly remembers being herself - and being happy. To a small village by the sea. (Who doesn't want to live in a village by the sea?!

The first few chapters have a lot of political machinations and descriptions - not my favorite. But it does give us an idea of what Sophie is living with and shy she rebels. (In fine fashion!)

The real treat is when she lands in the village. The village is home to many quaint shops, kind and generous villagers - and a handsome vicar and his son.... Uh huh, there is most definitely some attraction there.

I loved Milly as a lead character - the reader can't help but feel outraged at how her family and husband treat her. (And they are quite despicably well depicted) And hope that that little spark inside her can grow. The supporting cast in the village is simply wonderful - you can't help but wish you lived there! Johnson develops the Sophie romantic sub plot at the just the right speed - as friends with no agenda. There are also some other relationships in the village that need repair and these too are well depicted. There's a wee touch of magic in an old house as well that makes you wonder.....

And although the book builds towards it and the reader has an inkling of what it might be, the ending is simply perfect! I wonder if there could be more stories from this Yorkshire village?

Jenny Colgan is one of my go-to's for feel good reading. I've added Milly Johnson to that list as well! See for yourself - here's an excerpt of The Magnificent Mrs. Mayhew.
Posted by Luanne at 8:00 AM