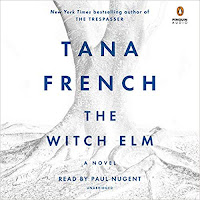 If it has Tana French's name on it, I'm going to read it. I love the Dublin Murder Squad series. The Witch Elm is however, a stand alone novel.

Toby breezes through life, doing well at work, lucky in love and with many friends and a supportive and loving extended family. But his life changes one night when his apartment is broken into - and he is severely beaten. He retreats to the family home to take time to heal and help out his elderly uncle. But that wished for peace is also broken - by the discovery of a skeleton in the garden of the house.

What can I say? French's writing is brilliant. The plot and the reader's expectations change multiple times. As Toby tries to puzzle out the past and present, new pieces are added and subtracted by his family, the police and his faulty memory until he can no longer discern what is truth and what is not. We become privy to the past even as the present changes direction. My outlook as to the whodunit and the ending changed many times over the course of the book.

French's characterizations are in-depth, rich and full with detail. The reader feels as though these are people they have actually met and conversed with. Many of the characters are not particularly likeable - and for me that included lead character Toby. The exceptions are Uncle Hugo and Toby's girlfriend Melissa. His cousins are particularly well-drawn, evoking a visceral reaction. Detective Rafferty is after the truth and his interrogations and actions are so well done.

The Witch Elm is hard to categorize - it's a mystery and police procedural, but at the heart of it I would say it's a character study.

This one's a chunkster weighing in at over 500 pages. I decided to listen to The Witch Elm this time 'round.  Paul Nugent was the reader and he was wonderful. His voice is easy to listen to, his enunciation clear and his accent appealing. But where he really shines is in bringing the story to life. His interpretation was wonderful. He captures the emotion, angst, action, tension and more, drawing the listener in. Different tones, accents and tenors identify each character. Here's an audio excerpt of The Witch Elm. Or if you prefer, here's a written excerpt.

I will be eagerly waiting the next book from French!

I've read all of Tana French's books and I liked this one. The audio was indeed good. I will say that I might prefer her Dublin Murder Squad books, but this one had an interesting storyline.

Tana French is my absolute favourite (modern) writer. What i love about her are the characters she brings to life.....similar to my fav film ‘Diner’ she examines characters/group dynamics and adds in a mystery. But the more important focus is always on the characters themselves.
Listened to the excerpt you included - and you’re right - he’s a terrific reader! Now I’m torn whether to read or listen to this one.
Cheers!

Kay - it was a good audio, but I agree - more Dublin Murder Squad!

Icewineanne - she is so very talented. Yes, her characterizations are so very well done. Either way, you're going to love it!